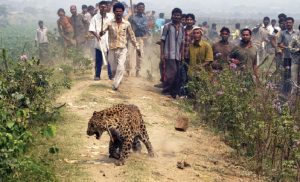 The scientists have used genetic data from leopards sampled across the Indian subcontinent to investigate population structure and patterns of demographic decline. Scientists collected faecal samples and identified 56 unique individuals using a panel of 13 microsatellite markers, and merged this data with already available 143 leopard individuals. The study suggested that leopards demand similar conservation attention like tigers in India.

The results of the study showed that coalescent simulations with microsatellite loci revealed, across India, a possibly human-induced 75–90 per cent population decline between approximately 120–200 years ago. This study suggests that leopards demand similar conservation attention like tigers in India. It also emphasizes the importance of similar work on wide-ranging and commonly perceived as locally abundant species, as it is possible that they may show population decline, especially in the context of the Anthropogenic.

The possible reasons for decline in leopard population are, the growing natural and anthropogenic pressures in the form of climate change, habitat loss and prey depletion, wildlife trade and human-wildlife conflicts are pushing large carnivores into ever-shrinking habitat islands and severely exacerbating their endangered status, and in some cases extinction.  However, their current distribution and numbers have significantly decreased across the range due to habitat loss, prey depletion, conflict and poaching over the last century.

The analyses of leopard status and distribution suggest 48–67 per cent range loss for the species in Africa and 83–87 per cent in Asia), making them among the top ten large carnivore species most-affected by range contraction). This has resulted in changing the species status from ‘Near Threatened’ to ‘Vulnerable’ by International Union for Conservation of Nature. Despite continuously decreasing numbers and range, their ubiquitous presence across human habitations leads to misconceptions regarding their current abundance.

To detect population structure and past population demography it is important to obtain genetic samples from different leopard habitats all across the study area. In this study, the researchers used leopard genetic data generated from non-invasive samples collected across the Indian subcontinent. They conducted extensive field surveys across the Indian part of Terai-Arc landscape (TAL) covering the north-Indian states of Uttarakhand, Uttar Pradesh and Bihar between 2016–2018.

On February 8, 2020, Ranthambore National Park published an analysis by Ashwini Kumar Singh “Figuring out the enigma of leopard deaths in India” which said that Indian leopard is a vulnerable species listed on the IUCN Red List because of its declining population. It was in the 18th century that the world got to know about this panther-like animal, which could run faster than any other animal.

In India, the population of Leopard was estimated to be around 12,000-14,000 as per 2015 census. The recent survey of 2018 has been conducted and data are yet to be released. The previous census put Madhya Pradesh as the state with highest Leopard population, followed by Karnataka and Maharashtra.

Why leopards are dying?

What is worrying the conservationists is the deaths of leopards. In the year 2018, India lost 460 Leopards to numerous reasons, including poaching, accidents, attacks by villagers and natural deaths.

Leopards are the most ignored big cats. Despite being majestic as well as endangered, not policies have been implemented focusing on conservation of Leopards. While the news of tiger death makes it onto the front page of every newspaper and media outlets, Leopard deaths mostly go unnoticed. From still being hunted in their natural habitat to being attacked by villagers, Leopards face threat from all sides. Out of 12,000-14,000 Leopards in India, almost 8,000 were reported to be around Tiger Reserves.  The trend of Leopard deaths hasn’t been new, with data of Leopard deaths exhibiting a consistent graph. India has witnessed the highest Leopard deaths in the last 5 years.

The Wildlife Protection Act 1972 prohibits the killing of endangered animals and it is a punishable offence. However, the low conviction rate in poaching cases has ensured that the act is deemed lenient. The inefficient prosecution added with the insensitivity of authorities to act on it has meant that poachers roam free. While animals like Rhinos and Tigers  enjoy the special status given to them, Leopard poaching cases fail to make to headlines of news outlets. The Leopard enjoys no political patronage and is often ignored when it comes to placing strict guidelines for deterring poachers.

While this might come as a surprise, but accidents have been one of the deadliest reasons for Leopard deaths in India. In just 2018 alone 74 Leopards lost their lives because of accidents. Unlike usual road accidents, putting stringent traffic laws can stop these accidents. Most of these accidents happen inside National Parks and Wildlife sanctuaries. Linear infrastructure has been blamed every time such accidents occur. While we have been trying to create natural habitats for wildlife, the presence of human lives has always posed a threat to wildlife. Infrastructures like Electricity poles, fences, railway tracks, roads within the sanctuaries have been the hotspots for such accidents. Last year, a train mowed down three tiger cubs as they  were crossing the railway track in the Vidarbha region of  Maharashtra. In Odisha last year, low hanging live wires electrocuted 7 Elephants. This accident occurred in Odisha Dhenkanal forest division.

Wildlife conservation depends a lot on the cooperation of local villages around the parks and sanctuaries. The villagers act as eyes and ears of the forest authorities. Also, with the help of local villagers, authorities can deter poachers. However, there has been one hurdle, which has been causing problems for wildlife conservationists. The hurdle is human-animal conflicts. From year 2011-2017, there have been more than 2 lakhs human-animal conflicts in just Maharashtra alone.

The parks, which house these wild animals, are usually constructed after acquiring lands from villages. However, the villagers are relocated to other places. Some of them are too close to wildlife sanctuaries. Also, the presence of animals in the buffer zone and then migrating to nearby villages have posed deadly threats for both animals and humans. Humans wandering into sanctuaries and reserves are often met with deadly fate and in response; the villagers kill wild animals seeking revenge. This has been a continued trend throughout the country. In some cases, animals wander off into the nearby villages, and in self-defence, the villagers kill the animal.

While we aim to provide natural habitat to these majestic wild animals, it comes at a cost. In a natural habitat, the cycle of nature overtakes, meaning that the natural order of jungles would determine the life cycle of the particular animal. In 2018, 194 deaths occurred due to natural reasons or some other reasons.

This also includes the natural hunting order, death because of old age, death because of illness and the territorial fight turned deadly. While many of us have adapted to this fact, citing natural order and balance, many conservationists question the efforts of the Forest Department and how they can prevent such deaths. Whatever might be the outcome, the fact is that natural reason and other small factors also contribute a lot to the total Leopard deaths in India.

While these are the reasons for deaths of Leopard in India, the question that arises is what can we do anything to prevent such a high number of Leopard deaths in India?

Prevention of such animal deaths is a mix of certain change in policies and implementation of the existing policies. Most important is strong punishment for poaching. This is one of the first necessary steps as one-third of the Leopard deaths occur due to poaching and hunting. Having stricter punishment and better conviction rates are the best deterrent for poachers. Then comes need for better conviction rate.

Linear infrastructure refers to highways, railway lines, electrical wires or any other infrastructure that passes through natural habitats of animals. Overcoming them would prevent the cases of accidents. Construction of natural corridors has been proposed. These corridors would be elevated corridors that would connect the forest covers.

Other solutions are rerouting the upcoming railway and road projects that pass through these natural corridors. Relocation of villages and providing apt compensation can go a long way. The villages that fall under the buffer zone or which are too close to the wildlife sanctuaries should be relocated to prevent human-animal conflicts.

Providing appropriate compensation can be an encouragement for the villagers to relocate. Also, increasing the buffer zone can be another way to prevent conflicts. If the Leopards are tracked in live time via a tracking collar, then authorities can keep a track of movements and the current medical status of the Leopard. In case, a Leopard drifts to nearest human settlement, the authorities can prevent it or warn the villagers.

Also, with tracking, they can ensure the well being of Leopards, in case a Leopard falls sick. The major reason that Leopards migrate to villages is that of overcrowding in sanctuaries. This lead to scarcity of prey and triggered territorial disputes. Planned redistribution of Leopard would ensure that no natural habitat is overcrowded with big cats.  A way to prevent human-animal conflict and empower locals is through promoting ecotourism around such protected areas. This would encourage the locals to be an active contributor to conservation efforts.  One of the most important measures that need to be the  focus of every conservationist is drawing out a proper Leopard conservation policy. Apart from that, we also need to change our attitude towards Leopards. While they might have higher numbers than other big cats but that doesn’t justify the casual attitude towards this majestic animal.

Although, the reports suggest that Leopard population has increased over the years, the increase in deaths makes us wonder, what the future hold for the majestic creature? While we cherish the good news, we can’t be lenient about the ongoing battle of wildlife conservation. There are problems but we know the solution too, so, let’s all pledge to work on the solution and aim for a better future of wildlife in India.