The death toll in the Punjab hooch liquor tragedy continued to rise, so far 86 people have lost their lives.

According to the officials, Chief Minister Amarinder Singh has ordered the suspension of seven excise officials and six policemen.

63 deaths were reported from Tarn Taran district, 12 in Amritsar and 11 in Gurdaspur’s Batala, officials said.

The total number of arrests in the case has also gone up to 25, sources said.

The Chief Minister also announced Rs 2 lakh ex-gratia compensation to each of the families of the deceased.

Capt Amarinder Singh on July 31 ordered a magisterial enquiry into suspected spurious liquor deaths in Amritsar, Gurdaspur and Tarn Taran. “Commissioner, Jalandhar Division will conduct the enquiry and coordinate with concerned SSPs and other officers. Anyone found guilty will not be spared,” he said.

“Punjab CM Capt Amarinder is directly responsible for the death of 80 persons in the Hooch tragedy. It is he who gave a free hand to Cong MLAs to indulge in illicit liquor trade. Since the excise dept is with him he must submit his resignation imm. It is time for him to go,” Badal said.

Badal further said, “The magisterial inquiry ordered by CM Amarinder is a joke. A Commissioner can’t be expected to indict Cong ministers and MLAs. The Congmen-police-liquor mafia nexus can only be exposed by a judicial probe headed by a sitting judge of the Pb and Haryana High Court.”

“We demand arrest of all Cong leaders responsible for the Hooch tragedy. If this is not done it will be clear that the CM is hand in glove with them. SAD expresses condolences with bereaved families & demands each family be given Rs 25 L compensation & a govt job,” he added. 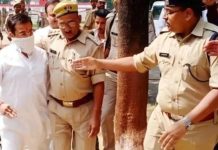