WHY DOES society hold certain things as ‘valuable’? This is a question LN Tallur asks of those who look at his work. The 41-year-old artist won the ŠKODA Prize 2012, one of India’s biggest contemporary art prizes for artists under 45 years of age, by questioning the sanctity of the very space where his prize-winning show Quintessential was held — the Dr Bhau Daji Lad Museum (BDL) in Mumbai.
“I see myself as a museum. I try to see where a work comes from, how to see it and how to show it to the audience,” says the artist hailing from Tallur, Karnataka. He also questions why people see what they see in a museum. Take, for example Thatwamasi (that thou art). Dust sucked from a vacuum cleaner swirls around in a resplendent case that museums use to preserve artifacts. The dust becomes ‘art’ simply because of the space it occupies. “It’s tongue-in- cheek and spoofs the aura an object takes on,” says BDL Museum Director Tasneem Zakaria Mehta, adding, “the show is an investigation of how museum spaces work.”

It’s not just space. Tallur questions the value assigned to money and to religious symbols in India. As he says, “I want my work to make people think.” To do so, in his 2010 show Chromatophobia: The Fear of Money he invited his audience to nail coins into a hollowed out log affixed to bronze statues of Goddess Laxmi (or a laughing Buddha for an exhibition in Berlin). Tallur renders artifacts symbolising cultural history and the worship of wealth, worthless. By engaging the audience he makes them complicit. He appropriates traditional symbolism, tying it to contemporary concerns of empty idol worship and society’s obsession with ritual. “His low-tech machines destroy idols from popular iconography. His works are tangential to current political debate. But he deals with time and history through a gentle humour, not sharp criticism,” says art writer Girish Shahane.
Tallur has been living in South Korea for nearly a decade with his wife and daughter. He has spent years deliberately globetrotting, starting with a scholarship to study in Leeds having already studied museology in Baroda. Despite the wanderlust he has remained rooted in India. In Veni Vidi Vici, the installation on display at the National Gallery of Modern Art (NGMA), New Delhi, he has used Mangalore terracotta tiles, with the legend ‘Exhibition December 1917: Golden Medal for the Tile Works’ printed on the wall next to it. It harks back to the tile factories set up by Basel missionaries, nearly 200 years ago in Mangalore, to employ Christian converts. These competed with each other for the best product, not unlike Indian artists competing with each other for the ŠKODA Prize. He cheekily calls his win history repeating itself.
Tallur’s content makes an impact because of his proficiency with form. The artist Dilip Ranade, his mentor from the erstwhile Prince of Wales Museum, Mumbai, says, “He knows how to manipulate materials to create shock, fear and uneasiness. His form becomes his metaphor.” For instance, Panic room (2006) is an enclosure made of inflatable sacks that swell up and enclose one in a claustrophobic space. Eraser Pro (2011), a bronze Gandhi statue, has been polished till it’s weathered. Polishing is used to make things look better. Yet, in their desperate attempts to regain the sheen, people often forget what’s underneath the surface. “People forget what Gandhi stood for and appropriate him for various agendas,” says Mehta. Tallur’s human figures are in states of disintegration — the original thought is warped beyond recognition.
All is not shock and horror. Tallur gives his work grandeur and lushness that comes from his interest in traditional craftsmanship. As Nature Morte curator, Peter Nagy says, “The way he fuses wood with iron and bronze produces sexy, luscious pieces.” Tallur breaks the sacred space of art, with its no touching rule. Sight, smell, hearing and touch, all engage the viewer.
Tallur’s works are currently on display at the NGMA, New Delhi
aradhna@tehelka.com 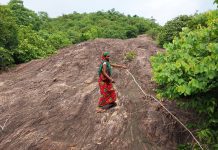