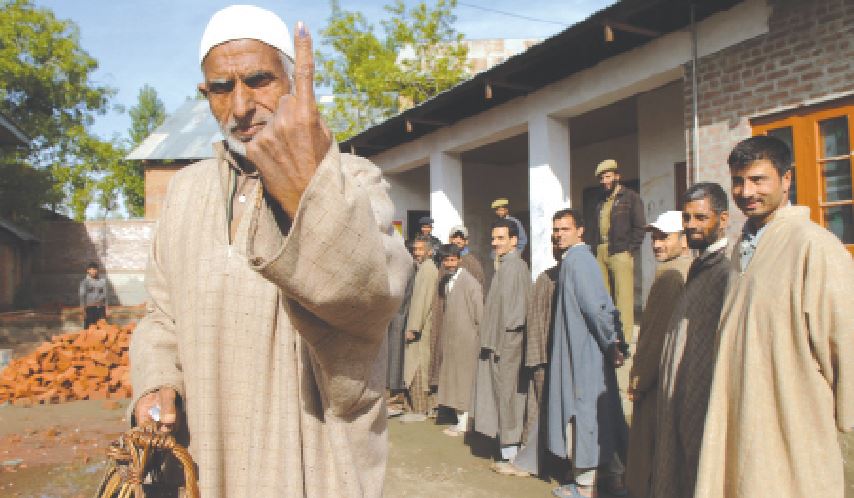 On November 22, just six days shy of the first phase of the District Development Council election, Taj Mohi-u-Din, former J&K Minister and Congress leader, also decided to contest. When asked why a former minister would fight district level polls, Mohi-u-Din said he was doing this to prevent the BJP from getting a toehold in the constituency.

“I don’t bother about the protocol. I want just development and relief for the people,” Mohi-u-Din said. “Our motive is the BJP should not get space here.”

Mohi-u-Din’s participation could set up an interesting three-way contest among the Congress, the candidate of People’s Alliance for Gupkar Declaration (PAGD) and the BJP. And the contest also reflects the complexities of the DDC election. Even though the contest is broadly between the BJP and the PAGD, an alliance of six parties including National Conference the PDP and the CPI(M), in reality the contest is wide open. The Congress party and the independent candidates have turned it into a multi-sided contest in many constituencies.

More so the Congress party which has shared an ambivalent relationship with the PAGD whose meetings it had earlier attended as a formal member. The party has since quit the alliance. Incidentally, the Congress exited the PAGD within hours after the home minister Amit Shah attacked the party over its tie-up with Gupkar grouping and asked it to clarify its position on restoration of Article 370 revoked by the Modi government in August 2019. Congress chief spokesperson Randeep Surjewala said in a statement that his party was not a part of the Gupkar alliance and was contesting the district development council elections in Jammu and Kashmir to “expose” the BJP through democratic means.

Though, the state president of the party Ghulam Ahmad Mir has talked about a seat-sharing agreement with the PAGD, it is not yet clear whether such an arrangement is on a seat to seat basis or for all seats. It is also not clear whether Mohi-u-Din is contesting in his personal capacity or as a Congress leader. It is not the party that has announced his name for the seat but he himself has done that.

At the same time, the PAGD too has had its seat-sharing issues. The alliance has often struggled to finalize lists of candidates for the election prompting the PDP leader Mehbooba Mufti, one of its major constituents, to express her frustration.

“PAGD was formed solely to safeguard the identity of people of J&K that has been under constant attack since Aug 2019. To assume (that) it was created for the petty electoral gains or to further party interests is erroneous. We have a bigger cause to fight for than to bicker over DDC elections,” Mehbooba tweeted.

But now the PAGD has sorted out its differences and issued lists for all the phases of the election. This has set up a contest broadly between the BJP and the rest comprising the PAGD and the Congress in a loose seat-sharing agreement. This has created a tough situation for the BJP which has to contend not only with a deep disaffection in Kashmir Valley but also in Hindu majority Jammu division, otherwise its bastion.

The eight-phase polls which begin from November 28 were announced all of a sudden with the constituencies of the districts yet to be delimited. But the Gupkar alliance was quick to declare its participation taking many people by surprise as earlier the utterances of its top leaders like Omar Abdullah and Mehbooba had indicated they won’t be taking part in the exercise. This seemed to indicate that the Gupkar alliance was reluctant to fight polls as some quarters had expressed apprehensions that this would normalise the revocation of Article 370. But the PAGD decision has belied such expectations.

The PAGD has rationalised its decision to participate as a bid to reclaim the political space, cautioning that doing otherwise would enable the BJP and its allied parties to fill in the vacuum and control the levers of power. The grouping also argues that strengthening its political presence at the district level will add force to its position that Article 370 was revoked without consulting people of J&K. Given the powers the DDCs have been given, they have become the kind of mini-assemblies and the Gupkar alliance wants to control them to enhance its political clout.

Going by the unease in the former state about the new domicile and the land laws, the PAGD along with the Congress look set to do well. The BJP’s only credible chance to confront this alliance is to go back to its ideological moorings and rake up issues that seek to pit the majority of voters in Jammu against the PAGD. And this the BJP is trying to do by plying a narrative that paints the PAGD politics as “anti-national” and the alliance as the “gang”. In fact, no less than home minister of India has used this description for the Gupkar amalgam. The saffron party is also highlighting the fact that Mehbooba has refused to fly tricolour and Dr Farooq Abdullah, the head of the PAGD, allegedly sought intervention of China for restoration of Article 370.

Will this work to the BJP’s advantage? It depends how deep the resentment in Jammu is against the new domicile and land laws is. In case, the grievances about the perceived loss of the jobs and the land outweighs the nationalistic versus anti-national debate, the BJP could be in deep trouble. Should the saffron party lose Jammu it will be a big public disapproval of its Kashmir policy. The party which tomtoms the fact that the revocation of Article 370 enjoys wide acceptability in J&K will find it difficult to justify the far-reaching move.

This explains, in part, the home minister’s attack on the PAGD. And this also explains the alleged government created hurdles the PAGD candidates face during their campaigning. A scenario where a majority of the DDCs will be run by the Gupkar Alliance is likely to put roadblocks in the way of the ongoing execution of the BJP’s ideological project for Kashmir.

These huge stakes make the DDC polls profoundly significant. For one, the campaigning and the polling associated with them brings back the political activity to J&K after a hiatus of the fifteen months. It also confronts the BJP with its biggest political challenge in the region. So, as much as the election process is interesting for its own sake, the outcome of the exercise will be even more important. In case of the PAGD or the PAGD-Congress combine winning the majority of the DDCs, J&K would strengthen its case for the restoration of Article 370. A better performance by the BJP will vindicate the party’s stand.