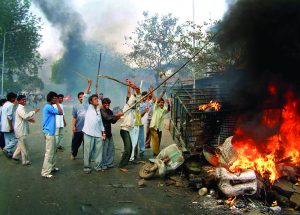 The Ministry of Home Affairs has dropped data on communal violence in its Annual Report 2018-19. The move comes after the country witnessed a 28 per cent spike in communal riots by the end of 2017 since 2014 when the BJP-led NDA government first assumed office. It has also withheld data on mob lynching and hate crimes.

Simultaneously, National Crime Records Bureau (NCRB), which is store house of all crimes that it collates from States and Union Territories, has introduced a chapter on violence by anti-nationals as part of NCRB’s latest data for the year 2017, already delayed by one year.

NCRB, at the same time, has omitted data on mob lynching by influential people, killings by Khap Panchayat, murders committed for religious reasons, all of these in the name of rule of law based democratic governance, where the government of the day is accountable to the people for its omission and commission. It has also added data on cybercrimes and offences against state. This is autocratic and subversion of rule of law and democracy making India a laughing stock of its democracy in the comity of nations.

However, the Annual Report 2018-19 describes protective, preventive and pre-cautionary mechanism for maintaining and fostering communal harmony and national integration in the Communal Harmony Guidelines by the Central Government laying down standard operating procedure to deal with the situations arising out of communal violence.

These guidelines are reiterated from time to time to sensitise States and Union Territories. It also describes how the Central Government assists States/Union Territories in maintaining communal harmony in their respective jurisdiction, adopting various measures to pre-empt and prevent potential violence, such as maintaining due vigilance, careful planning and preparatory actions.

Other steps taken include sharing of intelligence, sending alert messages, advisories etc. from time to time with a bearing on communal harmony. It also describes how the union government deploys Central Armed Police Forces including the composite Rapid Action Force, created especially for such situation, on the requests of States.

Among other measures, the annual report maintains, the activities of religious fundamentalists, organisations or groups or individuals, having a bearing on security, peace and public tranquility of the country are under constant watch of law enforcement agencies, and action under law is taken wherever necessary. Besides, certain organisations/individuals are declared unlawful associations under the Unlawful Activities (Prevention) Act, 1967 as amended to date. Such unlawful associations have to be scrutinized by the Unlawful Activities (Prevention) Tribunals constituted within six months from the date of such notification.

While the continuing hate crimes by the elements of Sangh Parivar, euphemistically called fringe elements, which factually they are not, are undermining communal harmony and national integration, suppression and manipulation of official data are denting public credibility, raising question over the peace and progress of the nation and eroding climate of investment. After all, business and investment do not thrive in a national ambience of heightened social tensions and considerable lack of reliability of official statics and data. Suppression of data is undemocratic. Hence, anti-people. It denies people their inherent right to information about the government functioning and accountability!