This year, celebrations of a two-centuries-old battle at Bhima Koregaon near Pune took such a turn that it will influence the political course of the country ahead of the Lok Sabha elections in 2019. It may also change the Maharashtra politics to give rise to new social and political equations in the state to the discomfiture of the present government headed by the saffron party, BJP, at both the Centre and in the state of Maharashtra.

Celebrations at the Jay-stambha to commemorate the battle between the British East India Company and Peshwa Baji Rao II 200 years ago have been regular for several years now with people from the Dalit community gathering at the monument on the first of January every year. The military memorial built by the British has become a symbol of valour and pride for the Mahars, a major community among the Dalits. Though caste Hindus never accepted the narrative associated with Bhima Koregaon, peaceful celebrations have been going on without interruptions. This time, on the 200th anniversary of the battle, the gathering was attacked and one person lost his life. Many vehicles were vandalized. Dalits leaders allege that the police did nothing to stop the violence.

Though there had been a series of Anglo-Maratha wars, the Koregaon battle signifies a decisive decline of military power of the Marathas. The battle also saw Bajirao II fleeing from Pune never to return again. The British commemorated the battle to exhibit their determination to defend the territory occupied in India. The obelisk at the banks of the Bhima river highlights the triumph of the Company soldiers in the most hostile situation. “Captain Staunton was destitute of provisions, and this detachment, already fatigued from want of rest and a long night march, now, under a burning sun, without food or water, began a struggle as trying as ever was maintained by the British in India,” writes contemporary British official and historian Grant Duff.

According to Pune historian Shraddha Kumbhojkar, “Neither side won a decisive victory but despite heavy casualties, Staunton’s troops managed to recover their guns and carry the wounded officers and men back to Seroor.” The Gazetteer of Maharashtra, published in 1885, also recalls the battle as the “defence of Koregaon”.

“As this was one of the last battles of the Anglo-Maratha wars that soon resulted in the complete victory of the Company, the encounter quickly came to be remembered as a triumph. The East India Company wasted no time in showering recognition on its soldiers. While Staunton was promoted to the honorary post of aide-de-camp by the Governor General, the battle received special mention in parliamentary debates the next year. A memorial was commissioned and Lt Col Delamin, who passed by the village the next year, witnessed the construction of a 60-foot commemorative obelisk,” reads a research paper published in the prestigious social science journal the Economic and Political Weekly.

The battle was fought between 900 soldiers of the Company and the 20,000-strong Peshwa army. Bajirao II witnessed the battle from a site 200 metres away from the battlefield and left the place, abandoning his desire of recovering Pune. British troops comprised of natives, mostly Mahars, and the Englishmen. The Koregaon memorial mentions the names of those who lost their lives.

It may baffle contemporary Indians as to how a memorial on  the triumph of British troops came to be regarded as a symbol of Dalit pride. But, it is not difficult to understand given the existing social situation during the Peshwa rule and the opening which was offered by the rule of the British East India Company. A close look into the past will contradict the narrow interpretation of political history of the country which presents a simplistic choice between the Peshwas and the British, the nationalist versus the foreigner. The Peshwa rule was casteist to the core and unleashed all kinds of atrocities against the untouchables. Mahars, along with Mang and others, were treated like animals and subjected to all sorts of indignities. They had lost whatever little they had gained during the rule of the first Maratha ruler Shivaji Maharaj who even recruited Mahars in his army.

The advent of the East India Company in Bombay (now Mumbai) provided the Dalits the opportunity to escape the tyranny of the Peshwas. The British recruited the so-called low castes in their armies in huge numbers. They participated in many battles and performed well. This was, o the one hand, a strong denial of the Brahmanical four order of Varna, a road to a life free from the atrocities that the untouchables were suffering at the hands of the caste Hindus.

However, it is not that the Koregaon battle was recognized as a liberating moment as soon as it was over or the obelisk acquired the symbol of emancipation as soon as it was erected. The fact is that they were reinterpreted and reinvented in the light of the new identity that Dalits were acquiring during the first decades of the twentieth century. This was part of the Dalit assertion which attained a peak under the leadership of Dr. BR Ambedkar. Ambedkar visited the site on January 1, 1927 at the invitation of Shivram Kamble who had been organizing celebrations at the monument for nearly two decades. Ambedkar also mentioned the memorial as a symbol of pride in his writings.

Ambedkar’s visit made the site a pilgrimage centre in later years and neo-Buddhists started to visit the site every year.

In this context, the debate on nationalism vs colonialism becomes meaningless and could be seen as part of communal historiography which is basically directed against the Muslims. In this case also, the Peshwas are the icons of Hindu nationalism because they carry the legacy of the fight against the Mughals.

The recognition of the Koregaon battle contradicts the legacy of Maratha rule as being invincible. In Maharashtra, the Hindutva narrative of Maratha rule projects Shivaji as a Hindu ruler who wanted to free the country from alien rule of the Muslims (Mughals). It automatically makes Peshwas as nationalists and those who oppose them becomes collaborators of foreign rule.

But the proposition hardly holds any water. Maratha chieftains were fighting each other and frequently taking help of the East India Company to defeat their opponents. The last Peshwa Baji Rao II himself had made the treaty of Baseein with the British in 1802 to oust the Holkar who had captured Pune and forced Baji Rao to flee. Kumbhojkar rightly points out how the Koregaon memorial faded away from the memory of the British and they abandoned mentioning the event in later descriptions of the empire. It is clear that, from the British point of view, the memorial became an insignificant artefact in due course of time.

But, for Dalits, it acquired an iconic status which was much more than winning a battle. The Koregaon memorial assumes significance in a wide anti-caste narrative.

It should also be recalled that like other Indians, Mahars served the British and their participation in Multan and Afghanistan brought praise as well, but they also took part in the 1857 war of independence. This led the British to distrust them. In the late twentieth century, they were stopped from being recruited in the army. Mahar leaders made a series of petitions to lift the ban. The World War I necessitated them to lift the ban but it was again imposed after the war. The ban was lifted again during the World War II.

The recent episode of violence is the result of socio-political equations which have been emerging in Maharashtra and other parts of the country. Marathas are fighting for reservation in jobs and education. The new Maratha assertion is partly directed against Dalits as they are also demanding abolition of Prevention of Atrocities against SCs and STs. The episode of rape of a girl at Kopardi also saw a violent anti-Dalit upsurge. The BJP has been exploiting this antagonism and mobilizing support of Dalits and OBCs against the dominant Marathas.

Meanwhile, the new Dalit leadership which has emerged in Gujarat after rising number of cases of cow-vigilantism grabbed the opportunity to expand its anti-BJP struggle in other parts of the country. They decided to celebrate the memory of Dalit victory with a meeting at Shanivarwada, the seat of the Peshwas in Pune. Most of the Dalit and youth organizations who are opposing the “communal” and “anti-poor” rule of Prime Minister Narendra Modi were invited. Prominent Dalit leader Prakash Ambedkar, Jignesh Mevani along with JNU student leader Umar Khalid and the mother of Rohith Vemula were the prominent speakers.

The opposition to this new formation, alleges Ambedkar, came from two Hindutva outfits — Shiv Pratishthan led by Sambhaji Bhide and Hindu Sangstha Aghadi led by Milind Ekbote. Both the organizations took advantage of the antagonism between Marathas and Dalits and incited violence. However, both Dalit and Maratha leaders soon recognized the danger of caste riots and united against the saffron government. The incident has now pitted Dalits against BJP. It is going to affect the equations that BJP has been building with an eye on the next Lok Sabha elections. Prakash Ambedkar is trying to forge an alliance of Dalit-OBCs in Maharashtra for years. The incident has opened up some opportunity for him as well. The new Dalit politics under the leadership of Jignesh Mevani will also help spread the social alliance that the Congress chief Rahul Gandhi tried to forge in Gujarat and in other parts of the country. The Koregaon incident certainly has ramifications for 2019. 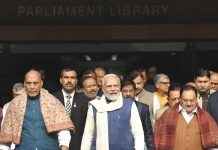 Cornered, BJP may shift political narrative ahead of polls in 9...