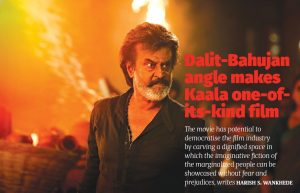 Very few would accept that cinema is a creative art form. Filmmaking is an essential attribute of the modern capitalist development that attracts huge investments. A big budgeted film in association with a mega super star needs great attention by the consumer audiences so that investors can make big profits. Only a good mass entertaining film can guarantee a commercial success. Kaala, in its narrative form, appears as a typical commercial flick made for mass entertainment. It is a story of a mainstream legendary fighter that leads the poor people against the precarious actualities of urban life and the evil design of political elites. What make it distinct and disruptive are its radical content, revolutionary language and alternative social symbolism. For the first time a mainstream film is presented to the audience with a ‘Dalit-Bahujan’ perspective.

Probably, this is the reason for its early departure from the cinema halls. The audience is not yet ready for such radical break in the narrative style of cinema. Our minds are still crafted for ‘mindless entertainment’ and for not for an intelligent, socially rooted, politically vibrant film. A grand success to such film would have disturbed the cinema pundits in their routine jobs. It is in the interests of the dominant social elites of the film industry that films like Kaala must fail at the box office. It secures their hegemony over the instrument of cinema and keeps the audience bewitched with irrational content.

Kaala is crafted as a ‘masala’ entertainer. It has all the possible ingredients of a popular cinema, plus an extra spice of Rajnikant, the Super Star added in it. But that is at the periphery as at the core it wishes to do something else. The film categorically subverts the given genre of popular cinema, breaks down borders and experiments with the narrative style of mainstream cinema. What makes the film distinct is its subaltern political ideology. The director, Pa Ranjith, further redefines the giant stature of Rajnikant as the new leader of the struggling masses and makes him ready for the actual politics. Thus it has a vision that counters the conventional praxis of cinema making. Importantly, along with populist entertainment, it proposes an ideological engagement with social realities.

Kaala is an epic retold in contemporary context of Mumbai. Kaala (Rajnikant) is the ‘Bhai’ of Dharavi, who safeguards his citadel with a private army and die-hard disciples. He is also a family man with a loving wife, four children and many grand children living in the same house. He is an unquestioned protector of ‘Dharavi’ and loved by its inhabitants.

The counter to this earthy Kaala is the powerful authoritarian political leader, Haridev Abhyankar alias Hari Dada (Nana Patekar). He is the quintessential class enemy: disengaged from the masses, rooted in social ritualism and interested in ‘clean and pure’ urban development of Mumbai. The villain represents the interest of the rich and the conservative mourning of the dominant social groups. He detests Dharavi for being dirty and wishes to revamp it so that the place can fit into his idea of civility and development. He instrumentalizes the modern institutions (Police/Judiciary/bureaucracy) to torment the poor. His power and status gives him a hedonist psychological comfort that allows him to think that he is ‘born to rule’.

Kaala defeats the corrupt design of the powerful class with his heroic physical strength, raw humor and the popular support of the people. Kaala represents the dark, poor precarious world whereas Hari Dada’s neat, clean, white milieu is used as a mask to hide his malicious criminal psyche. Kaala claims that the ‘black’ is the color of laborious proletariat masses and thus changes the meaning of black metaphorically.

What makes Kaala different from other masala flicks is its subversive attitude while depicting the popular story. It brings new social symbols and characteristics that are not seen much in the mainstream cinema before. First, it starts with making the grandfather the hero of the film. The protagonist is not young, perfect-bodied macho or a fair man- an essential element of masala films. Second, all the female leads are fiery, feminist-kind and devoid from the typical moral appearances of the conventional woman in the cinema. In Kaala’s home, the women are not submissive but vocal and independent. Third, the side-characters are not superficial but identifiable with the regular people that we see on the streets. There is no bold make-up, no dream sequences, no item song or no character wears unrealistic flamboyant attires. All the characters look absolutely real. Hence the background looks authentic and natural. In totality it gives the audience a surreal experience.

Importantly, the film does not hide the social demography of the characters instead it displays it boldly. The visible Dalit-Bahujan symbolism used in the film makes each frame rich with substantive sociological and ideological details. The audience of mainstream cinema is customized to see the hero as the representative of upper caste culture. The Hero would flag his Hindu social identity and its religious culture without any apology. But Kaala is not a Hindu upper caste hero. He belonged to a non-brahmanic social tradition. The narrative suggests that he is a Tamil Dalit, settled in Dharavi and must have adopted a Buddhist identity. On many occasions, the film displays the engagement of the hero with the Dalit-Bahujan iconography and in one scene it even depicts the practice of untouchability. Thus the thick social realism used in the film brings it closer to the actual subaltern world and produce a counter narrative.

Kaala is not only a display of alternative social symbols but it also builds a radical political alternative against the bourgeois rightwing politics of the current times. It showcases the growing democratic consciousness of the Lower Castes, religious minorities, women and other working class people in the depraved land of Dharavi. The films at its core represent the idea of democratic socialism. It retold the epical battle between the haves and have not’s in an actual sociological space. This is different from the Marxian brand of socialism. Here, the socialist politics is not meant to reduce all the social and cultural identities into a collective body as one working class but it uses and celebrates the primordial (caste/communitarian/linguistic) identities to form a plural collective of the people. Kaala thus offers a new socialist dream, under the leadership of proletariat vanguard while functioning within the populist democracy.

Further, the film endorses a hard definition of secularism. There are no mentions of ‘good religious values’ or showcasing of communal rituals, instead it portrays the devotees of brahmanical rituals in negative light. The white and disciplined house of Hari Dada is arranged with bold display of Hindu religious symbols, but he is characterized as patriarchal, sexist political boss having minimal respect for the life world of the poor. But, the Dharavi appears irreligious, away from communal passion

The question of land in the film is important as it connects the diverse colors of community and caste to become one revolutionary class at the climax. Here, the poor are not handicap and oppressive subjects but conscious and radical agents. Between the battle of massive poor majority and a tiny oppressive social elites, it is inevitable that the heroic proletariats would be the winner. The diversity erupts with different colors and dislodges the powerful elite from its throne. The mass turns into a revolutionary hero and continues the struggle for dignity, land rights and justice.

This is indeed a popular narrative. The director only improvises the epical tale by infusing a language and symbols unknown to the mainstream cinema. He simply handed the flaming torch of revolution to the actual oppressed social identities and provided it a heroic apostle. The story looks refreshing and real with such vital changes.

The traditional custodians of the cinema market will not be content with such departure. The film is pulled down from theatres for a banal commercial reason, suggesting that the Salman Khan’s big release ‘Race-3’ needs more screens. However, this is not the sole reason for its bad performance at the box office. The film reviewers, critics, trade pundits and other cinema experts depicted Kaala as a ‘bad’ film and called it ‘inconsistent’ with the logic of popular entertainment. There was an overall condemnation for its political overtones and ideological moorings. It was seen as a political rally to dislodge the current ruling elites in the power. It is also cornered as a film that flaunts deep cultural antagonism against Hindu religion and for heralding radical Ambedkarite politics as new revolutionary force. The critics thus depict their conservative fear and anxiety towards a film that tried to experiment with the dominant narrative style of filmmaking.

Whatever may be its commercial success, Kaala did establish that the ‘Dalit-Bahujan’ perspective has entered into mainstream cinema with a heroic élan. The way Nagraj Manjule’s ‘Sairaat’ impacted the story telling practices of Marathi cinema, there is a hope that ‘Kaala’ will also influence the other film world similarly. It has a potential to democratize the film industry by carving a dignified space in which the imaginative fiction of the marginalized people can be showcased and appreciated without fear and prejudices.

'Government can afford to make the public distribution system universal'