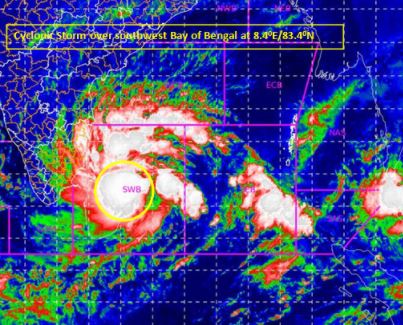 The Cyclonic Storm ‘Burevi’ over southwest Bay of Bengal moved west-northwestwards with a speed of 15 kmph during past six hours and lay centered at 0530 hrs IST of today, the 02nd December 2020 over southwest Bay of Bengal, about 240 km east-southeast of Trincomalee (Sri Lanka), 470 km east-southeast of Pamban and 650 km nearly east-northeast of Kanyakumari, according to the India Meteorological Department (IMD).

Sea conditions is very rough to high over southwest Bay of Bengal and along & off east Sri Lanka coast and the same will continue till night of 3rd December morning and gradually improve thereafter.

It will be rough to very rough over Comorin Area, Gulf of Mannar, along & off south Tamil Nadu-Kerala and west Sri Lanka coast on 2nd and very rough to high on 3rd and 4th December.

Sea condition will be rough to very rough over Lakshadweep-Maldives area and adjoining southeast Arabian Sea during 3rd – 5th December.

Total suspension of fishing operation during 2nd to 5th December over the areas as mentioned below.

Fishermen are advised not to venture into southwest Bay of Bengal and along & off east Sri Lanka coast from 2ndto 3rd December; Comorin Area, Gulf of Mannar and south Tamil Nadu-Kerala and west Sri Lanka coasts from 2ndto 4thDecember, over Lakshadweep-Maldives area & adjoining southeast Arabian Sea from 3rd to 5th December.