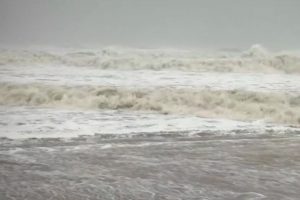 Cyclone Vayu has changed its course and it will not hit the Gujarat coast, the India Meteorological Department (IMD) said on Thursday.

“It (Cyclone Vayu) may not make landfall. It will only skirt the coast. It has made a small deviation. However, its effect will be there with strong winds and heavy rain,” sources said.

On Wednesday, over three lakh people were evacuated from coastal Gujarat and the Union Territory of Diu. The Indian Army, Air Force, Navy and Coast Guard have been kept on standby for relief and rescue operations.

Schools and colleges across several districts in Gujarat will remain closed today as a precautionary measure.

“Cyclone Vayu will not hit Gujarat. It will pass nearby from Veraval, Porbandar and Dwarka. Its effect will be seen on the coastal regions as there will be heavy wind speed and heavy rain as well,” IMD said.

Prime Minister Narendra Modi had said that the government is closely monitoring the situation urged people to follow the real-time information being provided by local agencies to stay safe.

The Central Government is closely monitoring the situation due to Cyclone Vayu in Gujarat and other parts of India.

“I have been constantly in touch with State Governments. NDRF and other agencies are working round the clock to provide all possible assistance,” Modi said.

“Praying for safety and well-being of all those affected by Cyclone Vayu. The government and local agencies are providing real-time information, which I urge those in affected areas to closely follow,” Modi tweeted.

On Tuesday, Union Home Minister Amit Shah reviewed the preparations for Cyclone Vayu. Following the High-Level Review meeting Shah had issued detailed advisories to the State of Gujarat and UT of Diu requesting them to take all precautionary measures with a view to ensure that no human life is lost, damage to vital infrastructure is minimized and to ensure early recovery of all essential services post-cyclone landfall.