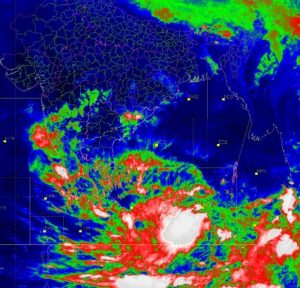 Cyclone Fani, which has been strengthening in south-east Bay of Bengal and the adjoining Indian Ocean, is set to intensify into a severe cyclonic storm by Sunday afternoon, according to the weather department.

The Indian Meteorological Department (IMD) said on Saturday morning, “The Deep Depression intensified into Cyclonic Storm ‘FANI’ and lay centred at 11:30 IST, near lat 5.2°N and long 88.5°E, about 880 km from Trincomalee (Sri Lanka), 1250 km southeast of Chennai. It is very likely to intensify into a Severe Cyclonic Storm during next 24 hours.”

“CS ‘FANI’ over SE BoB lay centred at 2330 hrs IST of 27th April 2019 about 1110 km SE of Chennai. It is very likely to intensify into a ‘Severe Cyclonic Storm’ during the next 12 hours and into a ‘Very Severe Cyclonic Storm’ during the subsequent 24 hours. It is very likely to move north-westwards till April 30 and thereafter recurve north-eastwards gradually,” IMD added.

Light to moderate rainfall is expected at few places over north coastal Tamil Nadu and coastal Andhra Pradesh on April 29 and 30, the IMD said.