The match between India and New Zealand at Trent Bridge in Nottingham has been called off on Thursday due to rain. The points have been shared between the two teams.

Both India and New Zealand were hoping to extend their 100% winning record in the competition, but regular showers prevented any play.

This is the fourth match that has been cancelled due to rain.

An inspection was to happen at 3 pm IST, the scheduled start time, but the rains came down before the umpires could step into the middle.

At 7.30 pm IST, the umpires had one last inspection before taking the decision to abandon the match.

With this result, New Zealand moves to the top of the points table, with 7 points from 4 matches. India has moved to third position on the table, with 5 points from 3 matches.

“India and New Zealand take home a point apiece. The @BLACKCAPS continue to sit atop the #CWC19 standings table, and #ViratKohli and Co. move up one slot to No.3,” Cricket World Cup said in a tweet. 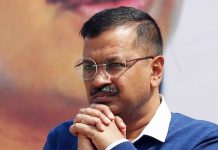