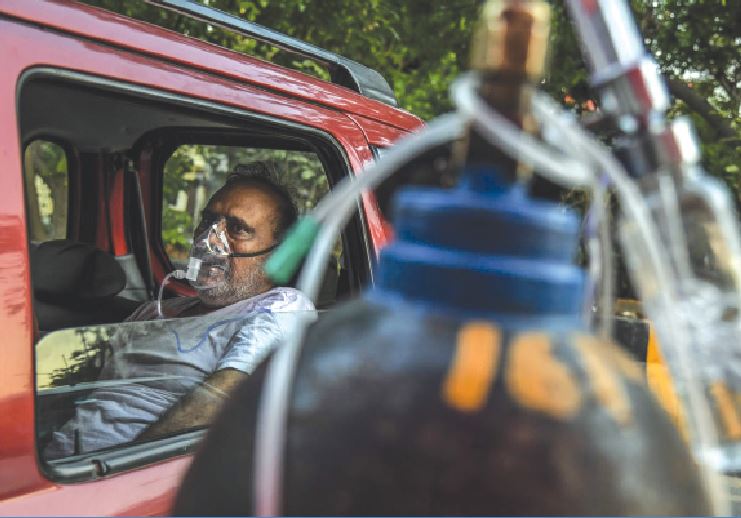 Jammu and Kashmir has consistently been witnessing upwards of 5,000 Covid-19 cases which is five times more than the peak last year. An average of 50 people are dying every day. This has pushed the healthcare infrastructure to the breaking point and further rise in the infections could create a chaos akin to the one being witnessed in New Delhi.

In a pro-active move to preempt the crisis, Lieutenant Governor Manoj Sinha has directed the healthcare officials to add 1050 more oxygen beds in Kashmir division within a week to ensure immediate treatment for the people requiring hospitalization. And to further ensure a sustained oxygen supply, the LG instructed the officers to ensure all newly installed oxygen plants have a backup buffer stock of oxygen cylinders.

Sinha also stressed expediting the inoculation drive calling for the program to be completed on a “war footing to reduce the mortality rate”. He issued instructions for introduction of vaccination in each municipal ward. And to this end, more mobile vans are being deployed. These vans are already operating in 36 municipal wards.

The administration, at the same time, is blamed for aiding the all-encompassing second wave in its bid to project normalcy in the Valley following the withdrawal of J&K autonomy on August 5, 2019. People are sore that thousands of tourists and the locals were allowed to visit Srinagar’s famous tulip garden and the cultural festivals, music concerts, fashion shows were organized — all part of a coordinated effort to show things are hunky-dory. This at a time when the second wave was fast spreading through some other parts of the country from where the tourists were coming. The administration has already imposed the lockdown but this has so far made little redeeming difference. The cases are witnessing an exponential rise and the peak seems still far away. This has come as a double whammy for the region: on the one hand, the rising infections is leading to more fatalities and on the other the lockdown is again hitting the economy which was going through a nascent recovery.

According to an estimate by the local business bodies, the Valley’s economy has so far suffered a loss of over 50,000 crore. Its fallout on the ground has been grim: thousands of people have lost their jobs. Sectors of economy like tourism, handicrafts, hotel industry, IT, transport etc have been crushed. People have been forced to shut down their old unviable businesses and start new ones. In one poignant case, a handicrafts shop on Boulevard was converted into a wazwan outlet. In fact, food outlets have surfaced where there used to be proper businesses.

Since December last, the economy was on the recovery path, much of it a result of revival of tourism after a 15 month long slump in the sector due to successive extended lockdowns — one was the security siege following August 5, 2019 revocation of Article 370 and another the first Covid-19 lockdown that began in March 2020. Over one lakh tourists have visited the Valley in the period which temporarily buoyed up hotel industry and the handicraft sectors.

Situation has now suddenly gone back to square one. The tourist arrivals have reduced to zero again. According to Rauf Tramboo, President, Adventure Tour Operators Association of Kashmir, the renewed Covid-19 outbreak has wasted a promising tourist season. “We expected tourists to arrive in droves in the coming months but the second wave of Covid infections in the country has killed yet another season,” Tramboo said. “Hoteliers, houseboat owners, travel agents, shikara owners and others are worried in the valley due to ninety per cent cancellation of bookings. Only those tourists who had already made their bookings for April came in small numbers”.

The opinion about lockdowns has been divided in Kashmir. There is a section of population which is against the measure as it leads to unsustainable economic losses. “Government should resist the temptation to go for yet another lockdown. Considering its disastrous fallout on the economy, lockdown is a bad word,” an editorial in Kashmir Observer read. “It is not possible for people to remain in a perpetual state of paralysis. This has already wrought havoc with the economy. More so, in Valley which has been under lockdown for the around twelve months in last two years”. .

But the administration which initially was reluctant to impose the lockdown has been left with no option but to resort to the draconian measure. The lockdown is regarded as a handy and immediate tool to reign in the runaway infection. But the government has so far little to show for the two weeks of lockdown: the infection curve has only become steeper. And no one believes it will flatten anytime soon.

The administration, however, is pressing on with lockdown in the hope that the reduction in public movement and the gatherings will go a long way to pre-empt fresh infections in near future. Besides, the ongoing vaccination is also expected to reduce the impact of the disease going forward. The third phase of the COVID-19 vaccination drive to cover people in the 18-45 age group has already begun in the union territory in a phased manner. In the initial phases of the vaccination, 75 percent of health workers, 78 percent of front line workers, and 38 percent of citizens above 45 years of age totaling 15,25,604 people have been vaccinated.

“Lockdown doesn’t produce results on its own. It needs to be augmented by aggressive vaccination, aggressive testing including that of incoming travelers,” said Dr Parvez Koul. “Besides, there has to be robust sequencing to be abreast about what virus we are dealing with”.

As the devastating second wave rips through J&K, the administration has passed two orders that are believed to detract from the fight against the pandemic: In one case, the government set up a state task force headed by an ADGP level officer to scrutinize the alleged ‘anti-national’ employees and terminate them without probe. Three employees have so far been dismissed and they can’t even take a recourse to court.

The terminated employees include a government school teacher from North Kashmir’s Kupwara, a college professor and a revenue official from South Kashmir’s Kulgam and Pulwama areas, respectively.

In the second order, the government has issued an order directing all oxygen manufacturing units within the jurisdiction of district Srinagar to stop the supply to any Non-Government Organisation (NGO) and to any private society with immediate effect.

It further states that oxygen supplies to private persons, societies, and NGOs would be facilitated only with prior approval of the district magistrate. The order has come in for severe criticism for making the intervention of the NGOs and volunteers which have been helping patients since last year, difficult.

“If anything, the steps like these show the government’s misplaced priorities,” says the head of an NGO who didn’t want to identify himself. “The administration needs to get its priorities right. It has to focus its attention on the stupendous challenge on hand. Any further rise in the cases could plunge Kashmir into a deeper chaos. So, the government can’t afford to divert its attention to imaginary problems”.