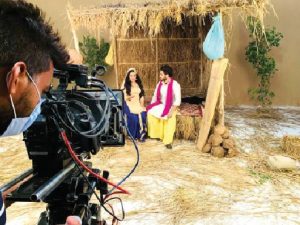 The fast spreading Covid-19 has hit the otherwise vibrant Punjabi film and music industry while also adversely impacting the livelihood of hundreds of artistes and other persons from humble background across the state for the past about seven months. Simply put, it seems only ironical that the very people who highlight all the societal good, bad and ugly through various forms and perspectives have been the most ignored during this on-going pandemic.

Sample this: Abhimanyu, a 30 year old upcoming professional actor who lives in Sector 25 colony in Chandigarh and comes from a humble background, has been jobless since the first lockdown. He now frequents nearby brick kilns on daily wages in the want of revival of the theatrical activities.

The most popular artistes of the north, the dholis (drum players) who are much sought after for Bhangra and all celebrations are out of work. Ravi, also a native of another Chandigarh slum colony, says that the joy of the drum beats is gone and many of them are either taking menial jobs or are simply or are without any earning waiting for normalcy to return. He adds: “Sadder fact is that there does not seem a chance of a normal festival season ahead, either, which means no earnings in the next several months”, he mourns.

Abhimanyu or Ravi are not the only such struggling artistes, for, the life of literally thousands like them — theatre enthusiasts, artistes and technicians associated and film or theatre, small town music groups singers or instrument players, dhol or nagara (drum) players, members of brass band groups, singers who perform at marriages or other such functions in villages, suburbs, towns and cities, has been alike across the region, all these months.

There are, nonetheless, some, especially the big names, who are going ahead though with baby steps and even helping within their own circles all such artistes in need.

Most of the well-established film makers, writers and directors of the region sorely agree with the depressing situation and say they themselves have been helping the needy within their teams as there is no one in the government to turn to by the artistes living in abject conditions.

Anurag Singh, known for his directorial skills in the film Kesari in the Bollywood industry and Punjabi “Jatt and Juliet” series, says that while the pandemic has shaken all the strata of the society and hit all the sectors, it has brought the film and music sector to a standstill derailing all its plans, budgets and schedules of shootings, recordings and shows”.

Director Simerjit Singh, known for his successful films like “Angrej” and “Daddy cool, munde fool” and “Nikka Zaildaar” shares similar feelings on the severe damage to the field due to the crisis. “While fortunately, digital media is picking up, the damage to the theatre shows — be it films, music shows or plays — has been severe, especially to hundreds of artistes and crafts persons and others such as make-up persons, press-men, spot boys, light and electricians and set professional who have had no jobs during these times”, he bemoans. Singh adds that though some of the film makers did extend helping hand to their team members in distress, as the damage hit their livelihood the hardest.

Hoping for a way-out in near future, music director Atul Sharma – known for his numerous hit albums for singers like Hans Raj Hans, Gurdaas Maan and Sardool Sikander — says the film and music industry has been standstill as the investors are uncertain of future are afraid of losses.

“No one knows when would the theatres open and in case these do we do not know what would be the strength of permissible audience. Hence no shoots or recordings and no jobs for hundreds of persons who otherwise have a regular jobs with these activities,” he adds.

Airing similar views, another music director Jaidev Kumar who has given several hits like “Dil le gayi kudi Gujarat di”, says while the virus’ spread has derailed the artistic activities, budgets are being revised, places for shootings (where permissible are being decided) though that would exclude a large number of artistes and daily wagers associated with these activities.

There are hundreds of Punjabi folk artistes and music groups in cities like Ludhiana and Jalandhar with which virtually hundreds of singers and instrumentalists are engaged for programmes in marriages, entertainment gatherings and bhajan recitals.

Ravi Kumar who runs a music group in Shimlapuri area in Ludhiana says that artistes associated with such groups are worst hit as theirs livelihood is directly associated with gatherings which is prohibited during the pandemic, hence harrowing times for all of them. “Some of his team members have started working at shops or even road-side eateries in Ludhiana and adjoining areas”, he adds.

The Chandigarh-based thespian says that all types of shows of performing arts are worst hit as for theatre a direct and intimate communication with audience is a must. Stating that absence of audience meant no theatrical activity, he adds that while theatre continues to be a non-lucrative field with artistes mainly doing it for their sheer passion, there are hardly any support in difficult times from the government agencies.

Theatre actor, director Sahib Singh who runs theatre group Adakar Manch (Mohali), agrees with the artistes concern especially during hard times adding that pandemic has once again brought to fore the need to think of financial support for theatre, especially from the government or corporate sector. He also cites how some of the senior theatrists pooled in and generated over Rs 3 lakh for artistes in need.

Sudesh Sharma, who runs Theatre for Theatre group, who also cites examples how artistes had joined hands to extend help for their associates in need, says that it was any irony that since artistes could not be unionists, holding placards, staging demonstration and shouting slogans against governments to seek help, they are the least noticed or talked about in these difficult times.

Author and art critic Nirupama Dutt also feels “It is time to support the artistes who literally have had to sing for their supper. Voluntary agencies as well as government cultural bodies should take the lead”.

Government in the know

One of the senior theatre artistes who is closely associated with an agency which promotes performing arts in Punjab, agrees that the situation has been grim for performing artistes, especially folk artistes during these months.

The thespian who did not want to be named said that he has, nonetheless, taken up the issue with the state government though nothing concrete has so far come out during to unexpectedly difficult times arising out of the pandemic. However, plans are afoot to give maximum support to the theatre groups and folk artistes by giving them sponsorships on the return of the normalcy, he adds.

“Yet, I and several other established artistes have tried to help artistes we came to know of who have been in the need. It is also a fact that the government agencies should have some policy to come to the support to the performing artistes, especially folk artistes like other sections of the society in difficult times”, he adds.