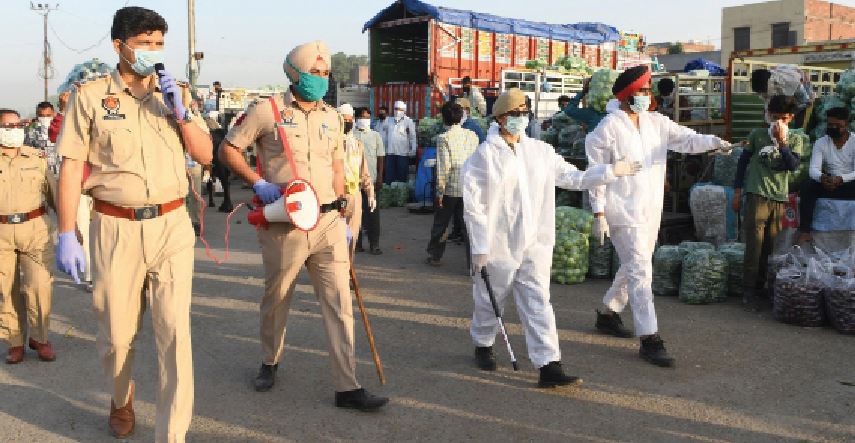 A sharp surge in the covid-19 cases in Punjab and Haryana has sent the two states in a tizzy forcing health authorities to seriously contemplate over enforcing restrictions again after a brief lull of about a month’s relief from the Corona virus spread. It is because of the swelling number of cases that the Central government had rushed high-level teams to Punjab and Haryana, besides a few other states to support the state governments in management of the covid-19.

According to official information, these teams were sent to the said states as these had been reporting a rise in number or demonstrating a sharp spike in daily new cases. These teams visited district reporting a high number of Covid-19 cases and aimed to support the state governments efforts for control measures as well as efficient clinical management of the positive cases besides guiding the states in effectively managing the challenges related to timely diagnosis and follow up of cases.

The situation in Punjab evoked concern. Even though the state showed declining trend as regarded the incidence of new infections on daily basis, there did not appear to be any let-up in high covid-19 mortality rate.

Punjab which has already seen over 4,500 deaths and which has had the highest death rate of covid-19 cases (3.2 per cent) in the country, has already had a total over 1,45,000 positive cases. There are already more than 6,700 active cases which are said to be up by 60 per cent since last month.

The mortality rate between October 1 and October 17 was 4.56 per cent against the national average of 1.52 per cent the same in August and September figures of 2.83 per cent and 3.24 per cent, respectively, official reports say. The health experts, however, hope the death rate would fall with the number of critical patients. The records showed that majority of fatalities were in the age group of 60 years and above as well as persons having other health complications and conditions.

However, Punjab health department spokesperson for covid-19 Dr Rajesh Bhaskar says the death numbers have started showing a downward trend. He said that the daily death count which used to be close to 80 in the past has come down to around 15. He further said that there has been a drop in the number of serious patients as well. If earlier the average number of patients whose condition became serious daily was 20, the number has now dipped to under 10.

He went on to say that fewer serious cases is a positive sign, since mortality is high in this group. The positivity rate is on a consistent slide and so is the number of critical patients. Together, these factors will bring down the mortality rate, he added.

Even the doubling rate of the cases in the state declined in the fast half of November. Reports are that after the October decline in positive cases, the number swelled again since the beginning of the month. From about 2,500 cases reported the last week of October, the number rose to 2,900 in the first week of November and then to 4,200 in the second week. Dr Bhaskar admits that while the cases had increased, the situation was under control. All measures necessary to contain the virus were being taken, he says.

The state’s daily testing figure too dropped in the past fortnight. While Punjab conducted over 5,300 more tests per million, its number fell to 2,600 by mid-November, reportedly because of the declining new cases. Punjab Chief Minister Capt Amarinder Singh — while offering all possible help to Delhi in managing its spiralling Covid cases — has exhorted people to take all types of preventive and precautionary measures.

The chief minister said in a statement that while nobody knew when the second wave would strike Punjab, experience of the National Capital Region and other states/regions showed it was an almost certain eventuality. He said it was also the responsibility of the people to actively partner the state in the fight against the pandemic by strictly following all safety norms. He declared ‘Mask hi vaccine hai’ as the resolve of “mission Fateh’’ for the next few months, till a vaccine against Covid finally comes.

He also digitally launched 107 health and wellness centres to boost healthcare infrastructure in the state, and provide health services to patients.

The state’s chief secretary Vini Mahajan has also lauded the health and medical education staff for their hard work in keeping covid-19 in control in Punjab, which had good recovery rate, however, has arned against complacency in view of the high mortality rate, which was attributable mainly to co-morbidities.

Meanwhile, Haryana chief minister Manohar Lal Khattar has expressed his concern over the increasing cases of covid-19 in Haryana and laid an emphasis on the need for strict implementation of preventive and precautionary measures.

Even health and home minister Anil Vij has hinted at the possibility of re-imposing a lockdown if people did not follow safety protocols.

Khattar said that while many suggested imposing another lockdown, it was not the solution because people’s livelihoods were at stake. He appealed to people to take utmost precaution, follow social-distancing and wear face masks.

Vij said after he issued instructions to all top police officers and officials of various other departments to deal strictly with people who were not wearing masks, keep a strict vigil on all kinds of gatherings and not allow any crowd formation. He also directed officers to ramp up testing, especially at inter-state borders.

Stating that the death rate in Haryana was 1.01 per cent while it was 3.2 per cent in Punjab, Khattar also highlighted the recovery rate which was over 90 per cent.

Khattar said that since every child was not able to get the benefit of online education due to lack of resources, a decision had to be taken to re-open schools. But recently, schools had to be closed till November 30, 2020 after it was noticed that many students and teachers were found covid-19 positive. Now whenever schools would be opened again, covid-19 tests would be conducted in their houses or localities, he added.

It may be recalled that at least 72 students of about 12 schools in Rewari were found to be covid-19 positive when the schools were reopened in October.

Like in some other parts of the country, especially Delhi, the surge in covid-19 cases in Punjab and Haryana is seen to be because of the increasing permissions for the public movements — in buses or in markets or other busy places. Also the recent festival gatherings and marriage season were also seen as a major cause behind the spread.