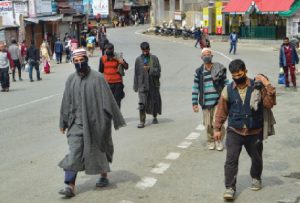 Despite a strict lockdown over the past two months, Kashmir has witnessed a steady rise of coronavirus cases. Over the past week the figure has intermittently gone beyond hundred a day, something that has signalled an incipient community transmission in some areas.

Over the past two weeks, many patients admitted at Srinagar’s Chest Diseases (CD) hospital have had no travel history or a traceable source of infection. One of them was 65 year old woman of Kulgam in South Kashmir. She was first admitted at the Surgical Intensive Care unit of Srinagar’s Sri Maharaja Hari Singh Hospital (SMHS). But two days later, she tested positive for Covid-19 and was shifted to the city’s Chest Diseases Hospital where immediately after admission she suffered cardiac arrest and instantly died.

She had no travel history, nor is there evidence that she had come into contact with a Covid-19 patient. Similarly, a 75-year-old man from Hilar in Kokernag, again South Kashmir, met the same fate. He also went from being admitted at the SMHS to being referred to the CD hospital  after being diagnosed with coronavirus.  Both, however, had underlying medical conditions and the Covid infection exacerbated their diseases, causing their deaths.

But the worry for the doctors at SMHS is how did the two and the other similar cases get Covid-19 infection. “We can’t say conclusively but there are indications of some community transmission,” says Dr Nisarul Hassan, who is also the president of a faction of Doctors Association of Kashmir. “But it hasn’t spread much. It is still localized”.

The Covid-19 struck at a time when thousands of people were returning to the Valley after spending winter in other parts of the country or abroad. Hundreds were returning after performing pilgrimages in Saudi Arabia and Iran, which at the time was in throes of the infection.

The Valley’s first case, a 61-year-old woman from Khanyar area of downtown Srinagar had returned from Saudi Arabia after performing Umrah (pilgrimage) in Mecca. She has since recovered. Her case was followed by that of a cleric from uptown Srinagar who had returned from New Delhi after attending the now controversial Tablighi Jamaat conference at Nizamuddin. He died shortly after. Ever since cases have steadily mounted as the number of tests rose.

A system has been put in place, as elsewhere in the country, whereby the Covid-19 suspects and people with travel history are tested and in case of any of them turning out to be positive, their contacts are also tested. The process has spawned a chain reaction that shows no sign of coming to an end. Along the way, it has become increasingly difficult to trace the infection to already identified cases, more so as new cases have come up.

“Many fresh cases like one of Kulgam woman have startled us,” says a doctor, who works as a nodal officer for coronavirus control. “But at the same time transmission hasn’t gone beyond control. We are in a position to reign it in”.

Another doctor said the ongoing Covid-19 testing regime couldn’t by itself  determine the community transmission. “We follow a rigorous practice. We trace the contacts of Covid-19 positive patients. So when there is a fresh positive case, it  has a cause and a source,” the doctor says. “But in order for us to determine the community transmission, we have to go beyond contract tracing. We have to test aggressively and randomly in specific areas. We have to test healthy people”.

The doctors are recommending antibody testing as against Polymerase Chain Reaction (PCR) to check if any community transmission of virus has taken place. “The PCR test is done after a person has become infected. It detects the genetic information of the virus. That’s only possible if the virus is there,” says Dr Nisarul Hassan. “The antibody test is done on the asymptomatic and apparently healthy population. It tells us what percentage of the population has been infected. It tells us that a person had infection after the virus has been cleared from the system.  This way we know who’s been infected and who should be immune to a future infection.”

But it is the cases that are coming up outside the contact tracing that are leading doctors to suspect community transmission. “We have come across some positive cases which were not part of the contact tracing. This has caused suspicion,” says a doctor. “Here, the patients don’t have a travel history nor a history of having been in touch with any positive patients”.

In April,  in a case of a localized community transmission, sixty-four positive cases of novel coronavirus were reported over 10 days at Gund Jahangir hamlet in North Kashmir’s Bandipora district. Scores of cases were also reported from the nearby Hajin township. The area, temporarily became known as Wuhan of Kashmir. But a strict lockdown and aggressive testing the area have brought the infections under control.

However, at official level, the government has so far ruled out community transmission in the Valley. In a recent statement, the divisional commissioner, Kashmir, K Pandurang Pole  asserted that the government knew the source of every case that has been detected here.

“There is not a single case where we are facing any difficulty in tracing the source. Definitely, we are not in the community transmission mode,” Pole told reporters.

A doctor, however, suggested “a broad-based epidemiological study” to know the spread of the coronavirus in Kashmir.  According to him, the government should consider taking at least 6000 samples all over the valley of a cross-section of population. “The sample should have pregnant women, aged, children, newborn, youths, labourers,  health workers, other professions, high-risk areas, low-risk areas, contacts, travel history, no travel history, people with underline diseases, for a research study,” he said. “This will help us credibly determine whether there has been a community transmission”.