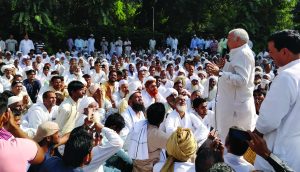 Haryana’s former chief minister Bhupinder Singh Hooda’s troubles seem to be increasing with the passing of each day. As the Parliamentary and Assembly elections in Haryana draw near, AJL and other land related cases may trouble the veteran Congress leader more in the days to come. Already other Congress leaders including Randeep Singh Surjewala and Haryana Congress president Ashok Tanwar from the Dalit community are vying for the state leadership and replace Hooda. Still there is no doubt that Hooda continues to be the strongest Congress leader in Haryana and his weakening will have a direct bearing on the state politics as there is no leader of his stature in the state Congress.

In the latest development involving Bhupinder Singh Hooda, a Special CBI court in Panchkula, Haryana has summoned him and senior Congress leader Motilal Vora in the Associated Journals Limited (AJL) land case on January 3, 2019. Earlier the CBI had filed a charge sheet against Hooda and Vora in connection with the alleged irregularities in the re-allotment of an institutional plot in Panchkula to the AJL which allegedly is controlled by the Sonia Gandhi family.

The allegation was made under the Indian Penal Code (IPC) sections related to criminal conspiracy and the provisions of the Prevention of Corruption Act. Interestingly the CBI alleged in the charge sheet that that AJL was allotted a plot of land in Panchkula in 1982 with the condition that construction must be done in a year’s time, but no construction took place for 10 long years till the year 1992. It was then that HUDA subsequently took back the possession of the land allotted to the AJL.

Haryana Congress came to power in the year 2005 after winning 67 seats in the state Assembly elections. Under Hooda’s regime in the year 2005, the same plot of land was re-allotted to the AJL at its original rates. It was alleged then that Hooda was working under pressure from senior Congress leaders to please the political masters, because despite the advice given by some officers in the Haryana government Chief Minister Hooda re-allotted the plot of land to the AJL.

According to the charge sheet filed by the CBI, this allegedly violated the laid down norms in the allotment and re-allotment of plots by the then HUDA Chairman Hooda. Now the Enforcement Directorate (ED) has attached the same plot of land in Panchkula which was allotted to the AJL under the anti-money laundering law. The

CBI alleged that the re-allotment of the plot C-17 in Panchkula, Haryana to the AJL led to a huge loss to the state exchequer. Under the BJP government’s rule, on April 5, 2017, the CBI registered a case on the request of the Haryana government after taking over the investigation in the case.

Earlier, the Haryana Governor S N Arya sanctioned to presecute Bhupinder Singh Hooda in the Associate Jounals Limited case on illegal re-allotment of land to the promotors of the English daily National Herald. The decision to hand over the plot case to the CBI was given by the Manohar Lal Khattar led BJP government in Haryana after it received the report of the Haryana state Vigilance Bureau (SVB). The SVB had registered a case of cheating and corruption against former Chief Minister and HUDA chairman Bhupiner Singh Hooda.

Now Hooda has accused the state BJP government of following a policy of revenge and charged the Leader of Opposition in the Assembly with being hand in glove with the Manohar Lal Khattar dispensation for registration of a case in re-allotment of a plot to AJL. Hooda, however claimed that no rule was violated in the re-allotment of plot to AJL.

Hooda said that the BJP government is now following a policy of ‘badla’ (revenge). He said the Manohar Lal Khattar-led Haryana government has failed to deliver all its election promises to the people and has done practically nothing for the welfare of people of Haryana.

Incidentally AJL is not the only case that Hooda is facing. A spate of land scams in Haryana have landed senior Congress leader and former Chief Minister of the state in deep trouble from where he will find it very difficult to extricate himself. The former CM faces allegations of multiple land scams, which have put a question mark on his political prospects.

Earlier the verdict by the Supreme Court in the Manesar land scam indicted Bhupinder Singh Hooda. The tallest Jat leader in Haryana has been charged with defrauding people by releasing public land at Manesar in Gurugram district of Haryana. Besides the aJL plot scam, the vetreran Congress leader is facing two other CBI cases at present, including the Manesar land scam and Panchkula Industrial plot scam. All of the cases are of a very serious nature and have the potential to put him behind bars if the court finds him guilty.

On May 1 this year, the Panchkula Special Central Bureau of Investigation (CBI) court granted bail to Bhupinder Singh Hooda in connection with Manesar land scam. Hooda, who failed to turn up for previous hearing had been excused earlier from attending the hearing on health grounds.

In the Manesar land scam allegations are that hundreds of acres of land acquired from farmers of Manesar and adjoining villages in Gurgaon district for public purpose was licensed to real estate companies, builders. Colonizers after giving out of turn favours and concessions. The CBI had registered a FIR in the case more than two years ago on December 17, 2015.

In the Panchkula Industrial Plot scam, allegations were that industrial plots were given to 14 people by allegedly manipulating certain provisions of allotment. These included allowing them to submit their applications even after the last date of submission had ended. The FIR alleged that ineligible beneficiaries were allotted plots at rates lower than prevailing market rates. This caused loss of several crore rupees to the state exchequer.

Hooda is also facing trouble with regard to Rohtak Land Acquisition scam in which Haryana Chief Minister Manohar Lal had recommended a CBI probe. Embroiled in these cases, Hooda will find it very difficult to concentrate on the forthcoming Lok Sabha and Vidhan Sabha elections in Haryana next year.