A total number of positive cases due to novel coronavirus rose to 29 in India with the latest being a Paytm employee in Gurugram.  16 Italian tourists who landed in India, one Indian driver who accompanied Italian tourists and six family contacts of the Delhi patient also tested positive.

All the patients who have tested positive are under isolation at various hospitals.

President Ram Nath Kovind, too, has cancelled Holi events at the Rashtrapati Bhavan.

“With alertness and safeguards, we all can help contain the outbreak of COVID-19 Novel Coronavirus. In a precautionary measure, the Rashtrapati Bhavan will not hold the traditional Holi gatherings,” President Kovind tweeted.

Principal Secretary to the Prime Minister P.K. Mishra on Wednesday chaired an inter-ministerial meeting to review preparedness and response on the corona virus issue.

A broad spectrum of issues were reviewed. Two important changes were made – namely introduction of universal screening at all international airports and sea-ports through use of thermal imagery equipment as well as mandatory filling of declaration forms of places visited by tourists and travellers returning from abroad, were noted by all concerned for operationalization. Ministry of Home Affairs was tasked to work closely with state governments, including relevant district administration officials, to ensure compliance with screening protocols at Integrated Check Posts (ICPs) on country’s land borders. National Informatics Centre would provide the requisite support to the Bureau of Immigration and MHA in this regard.

Decisions were also taken to rapidly implement opening of proper testing, isolation and quarantine facilities in various parts of the country, down to the district level, in partnership with the state governments. Ministries such as MHA, MoD, M/Railways and M/Labour would also seek to support and supplement the efforts of M/Health through use of their facilities and hospitals.

It was highlighted that participation of the communities and local bodies is essential to combat the public health challenge posed by the virus. It was decided to explore the greater involvement of private sector.

In light of the public health experts’ recommendation to avoid big public gatherings, it was decided that all Government departments and ministries shall consult Ministry of Health before organising Conferences and international meetings in the country at present. 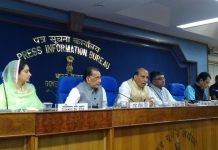