Delhi Chief Minister Arvind Kejriwal on Monday announced the closure of all gyms, spas and night clubs in the National Capital till March 31 as the number of cases in India rose to 110.

Addressing the media, Kejriwal said, “All the night clubs, pubs, gyms and spas will be closed in Delhi. We request the citizens to avoid social gathering.”

Kejriwal said all gatherings including religious, social, cultural and political with more than 50 persons will not be allowed in Delhi. He, however, excluded weddings from the list, but asked people to avoid them if possible.

“The special task force headed by CM @ArvindKejriwal orders all DMs, SDMs to install hand wash dispensers across Delhi, DCs of MCD to install 300 dispensers in their areas with liquid soap and water,” AAP said in a tweet.

The number pf confirmed coronavirus cases in India rose to 110 on Monday, including foreign nationals. 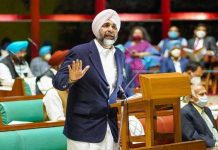