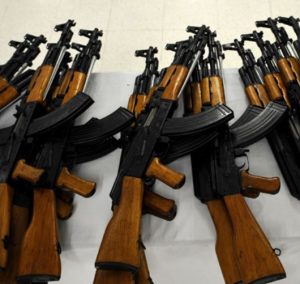 An adhoc police man posted with a legislator Ajaz Ahmad Mir has fled with seven AK-47 rifles and a pistol in Kashmir. The matter came to light when the personal security officer (PSO) of Mir informed the police station Rajbagh that the weapons of seven PSOs attached with the legislator were missing from his official residence at the nearby Jawahar Nagar.

Though there have been such examples earlier too, this is first time that a large number of the weapons have been stolen in a single instance. The cop has been identified as Adil Bashir. He, incidentally hails from Zainapora in South Kashmir district Shopian, the native village of the legislator.

The police have sounded a high alert across Srinagar while all routes leading to south Kashmir are being monitored. Checking points have been set up in several city areas, in a bid to nab the cop, who is apprehended to have joined the militancy.

Earlier in 2015, a cop Naseer Ahmad Pandith guarding the house of former PDP minister Altaf Bukhari had decamped with two rifles and joined Hizbul Mujahideen. A year after Pandith was killed in an encounter with the security forces.

And during the five month long unrest in 2016, militants snatched around 64 weapons from the police personnel in parts of South Kashmir.

Their modus operandi has so far been to threaten with an attack the police men standing guard at the public places or protecting a VIP or a government installations and then snatch their weapons.

The growing incidents of weapons snatchings have been a source of deep worry for the security agencies. The stolen weapons invariably fall into the hands of the fresh recruits to the militancy. This year many more youth across Kashmir have gone missing and joined militants.

The rising incidence of gun snatchings, sources in police say, is the result of the shortage of weapons with the militants. “The militants have a limited number of weapons and the ammunition,” a police officer said adding it was difficult to smuggle weapons from Pakistan due to the fencing on the Line of Control.  “So, the new recruits are asked to get their own weapons and encouraged to attack the police men on guard duty, sometimes with help from regular militants”.