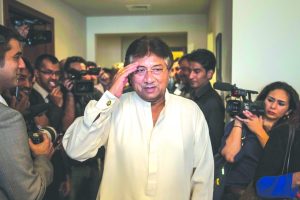 The Pakistan Army’s sharp reaction against the judicial verdict awarding death sentence to a former military dictator, Pervez Musharraf, shows the tradition power centre in the country, GHQ, is unable to find a way to retain its supremacy in the power game of the country’s murky politics. With Prime Minister Imran Khan’s inability to manage the judicial verdict in favour of the dictator who had sacked a civilian prime minister, GHQ and its commanders have only one choice that to invoke the doctrine of necessity.

Musharraf had dismissed the then Prime Minister Nawaz Sharif in a bloodless coup in 1999. He had ruled Pakistan from 1999 to 2008. The initial reaction was the deterrent impact on the armed forces, if they again try to grab power by sacking civilian government. Ahmed Bilal Mehboob, president of the Pakistan Institute of Legislative Development and Transparency, said in Islamabad. “It will have a deterrent value.” Hassan Nissar, a noted journalist and commentator of Pakistan, known as a supporter of Imran Khan, has refused to make any observation on this issue.

Bhutto’s son Bilawal Bhutto Zardari, whose mother was assassinated by some secret service agents during the Mushrraf years, tweeted: “Democracy is the best revenge”.

The successive coups in Pakistan could be justified on the theory that of necessity for the public good. The medieval political thinker and jurist, Henry de Barcton had propounded this theory, which was first used in Pakistan in mid fifties, when the then chief justice, Muhammed Munir, validated the Governor general, Ghulam Mohammed, dismissing the Sind provincial assembly. On 24 October 1954 the Governor-General of Pakistan, Ghulam Mohammad, had dissolved the Constituent Assembly on October 24, 1954, and appointed a new Council of Ministers on the grounds that the existing one no longer represented the people of Pakistan. However, most of the people aware of the Pakistani politics believe that it was an attempt to stop the approval of the new constitution.

The then president of the Constituent Assembly, Maulvi Tamizuddin, appealed to the Chief Court of Sind at Karachi to restrain the new Council of Ministers from implementing the dissolution and to determine the validity of the appointment of the new Council under Section 223-A of the constitution.The Chief Court of Sind ruled in favour of Tamizuddin and held that the Governor-General’s approval was not needed when the Constituent Assembly was acting only as a Constituent Assembly. However, in the appeal the Chief Justice Muhammad Munir, favored the Governor General. This decision helped the military dictators of Paksitan to validate their illegal regimes.

However, with the conviction of Musharraf, the prevailing poltical ideology has collapsed. It is happening when the GHQ is not facing any opposition from the country’s major political outfits, Pakistan People’s Party and Pakistan Muslim League (Noon) on the issue of giving extension to the army chief Qamar Javed Bajwa. However, on the issue of capital punishment to the Delhi-born

Pakistani General Musharraf, the country’s main opposition will demand pound of flesh from the armed forces.  If the GHQ wants extension to Bajwa, it must reconcile to the judicial verdict against Musharraf. It is quite difficult for the cricketer-turned politician, Imran Khan, to work out an amicable political-legal solution to this face-off between the judiciary and the armed forces. It appears that the Bajwa coterie in the GHQ has to abandon Musharraf, though the spokesman of the army, Major General Asif Ghafoor has stated, that the armed forces were in “pain and anguish” over the decision.

General Gafoor’s comment against the verdict has officially shown that the armed forces are a separate entity than the civil government. It is now officially confirmed that the case of high-treason filed against Musharrf during the tenure of  prime minister Nawaz Sharif was against the wishes of the GHQ. In a comment, a senior Pakistani journalist, Najam Sethi, recollects that Sharif had told him that the legal proceedings against Musharraf were necessary to reduce, if not totally stopped, the interference of the GHQ in the affairs of the civilian government. The special Pakistani court headed by the chief justice of Lahore High Court, concluded the case pending before it since 2013 despite repeated delays until the final verdict. The final order surprised everyone, because the High Court had asked it to delay the final order sentencing the former military dictator and president Pervez Musharraf to death in absentia.

The army spokesman slammed the verdict, a two-to-one majority,  drew a strong reaction from the military that an army chief, Chairman Joint Chief of Staff Committee and President of Pakistan, who has served the country for over 40 years, fought wars for the defense of the country can surely never be a traitor. It further claimed “the competent court seems to have been ignored the legal process. Musharraf’s lawyer Akhtar Shah, has questioned that how the treason case could be only against Mushrraf, because he is just one of several involving Musharraf- centred on his decision to suspend the constitution and impose emergency rule in 2007. The imposition of martial law did not evoked wide-spread protests in the country.   Earlier, Mushrraf, who is undergoing treatment in Dubai and admitted to a hospital had bitterly criticized the treason case against him in a video message. Only a week before the verdict, he had stated from his hospital bed,”I think this case is baseless, they are not listening to me and they are not listening to my lawyer… it is a big injustice”.

Like the founder of Pakistan, Muhammad Ali Jinna, Mushrraf too was a non-conformist Muslim. He could drink scotch,  and may be never hesitated in eating any meat, not necessarily halal meat or even pork. Like his predecessor, General Zia, he too had jointed the US Camp in the “war on terror” after the September 11 attacks.

Musharraf’s regime was quite peaceful till he tried to get an oath of loyalty from the judiciary in 2007. He had issued provincial constitutional order like his predecessor General Zia. However, the judges led by the chief justice, Iftikhar Muhammed Choudhry and his colleagues refused to accept the Musharaff’s new diktat. In this backdrop, the role of Supreme Court towards Mushraff was “not very helpful”. It is also possible some people suspect that the judiciary is not averse to send him to gallows.

In 2017, a Pakistani court pronounced him a fugitive in the murder trial of Benazir Bhutto- the first woman prime minister of a Muslim country. After being found guilty of treason in 2019, he has the right to appeal in the Supreme Court. “We’ll definitely challenge it in the Supreme Court,” Musharraf’s lawyer Raza Bashir, but the army being a part of the government cannot file an appeal against the court order. It has to be done by Musharraf, but he has to return to Pakistan to file the appeal. If he does not return, he may be declared an absconding criminal. The interp0ole has to be engaged to drag him to Pakistan. He may apply for a presidential pardon, but again after the appeal is disposed off at the apex court. Also, it is highly unlikely that the courts will be over-awed by the army’s reactions. The Supreme Court may confirm his punishment.

The Imran Khan government, a band of cronies of the GHQ, has to prosecute the convicted general, though much against its wishes.A lot drama may be witnessed next year, but it si certain few will in the army may now dare to topple a civilian government.