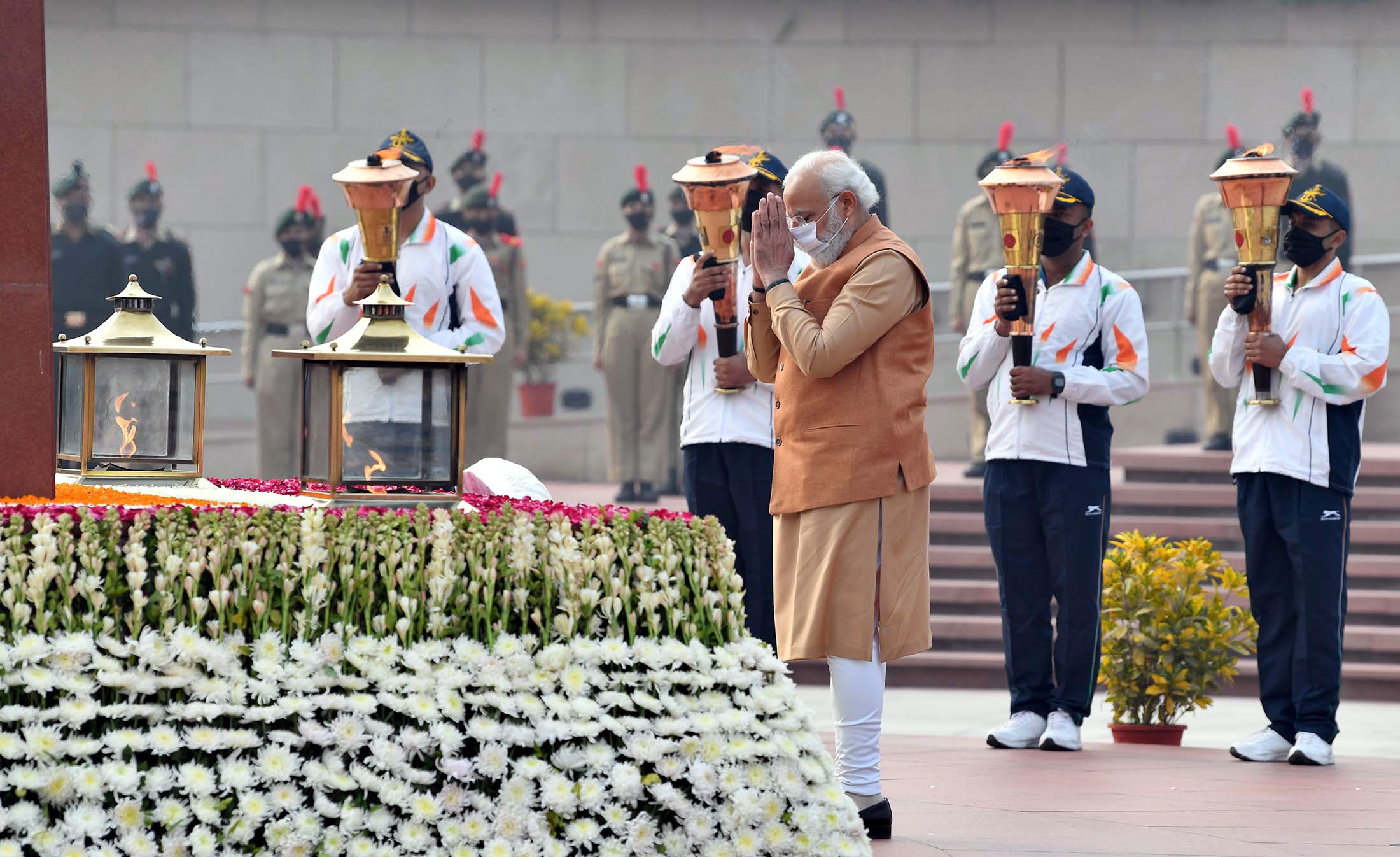 The Congress has reacted strongly to the failure of the central government in mentioning the name and contribution of former PM Indira Gandhi during the celebrations to mark the 50th anniversary of India’s historic victory over Pakistan in 1971. An opinion piece by Bharat Hiteshi

On December 16, 2021, President Ram Nath Kovind, in Bangladesh on an official visit, and Vice President Venkaiah Naidu also wished the people on the occasion of 50th Vijay Diwas. Prime Minister Narendra Modi, accompanied by Union defence minister Rajnath Singh, participated in the celebrations of the 50th Vijay Diwas. “On this special day of Vijay Diwas, I had the honour of paying my respects at the National War Memorial and merging into the Eternal Flame, the four Vijay Mashaals which traversed across the length and breadth of the country over the course of last one year,” Modi tweeted.

Home Minister Rajnath Singh hailed the war as a “golden chapter in India’s military history” and remembered the sacrifice of the armed forces. “On the occasion of  ‘Swarnim Vijay Diwas’ we remember the courage and sacrifice of our armed forces during the 1971 war. The 1971 war is the golden chapter in India’s military history. We are proud of our armed forces and their achievements,” he tweeted, sharing a few images of the war. Singh issued a commemorative stamp on the occasion. However, none of the messages mentioned Indira Gandhi’s name.

There is no doubt that victory in the 1971 war was undoubtedly the crowning glory of the Indian military, but it was also a victory on the diplomatic fronts. Indira Gandhi herself drew international attention to the human rights violations in Bangladesh. The Indo-Soviet Treaty of Peace came as huge help in the face of American and Chinese support to Pakistan.  The country also gave shelter to millions of refugees from Bangladesh who sought refuge in India to escape from the onslaught unleashed by the Pakistan forces.

At the golden jubilee celebrations, the government should have the magnanimity to remember all those who played stellar roles that led to unconditional surrender by the Pakistan military. Addressing the closing ceremony of celebrations of Bangladesh Liberation War of 1971, Congress president Sonia Gandhi said that late Prime Minister Indira Gandhi, who played a pivotal role in the war, would have wanted the party to celebrate “not in a boastful spirit or in a spirit of self-glorification, but in a spirit of reflection and resolve”, an apparent jibe at the Centre. She described 1971 as Indira’s “finest year” and urged the party to reaffirm “our steadfast commitment to the values she cherished, and the causes she fought for – and ultimately sacrificed her life for.”  Gandhi lauded the armed forces, the people of Bangladesh and said, “It was this extraordinary convergence of a well-planned and perfectly-executed political, diplomatic and military strategy that gave 1971- a distinctive place in the history of the sub-continent. It was a history that reshaped geography as well.”

Sonia Gandhi described how Indira Gandhi mobilized international support, “remained supremely composed and confident drawing upon her immense reserve of inner strength” and reached out to all party leaders. She also mentioned the then patchy relationship between the US and India and said, “Indira ensured that the USSR was with India. She travelled tirelessly to Western capitals. She sensitized the entire world community to the cause of the people of Bangladesh with personal interviews, meetings and appeals. And how can we ever forget the manner in which she stood up with the greatest fortitude to the crass insensitivity and crude bullying of the then President of the United States and some of his advisers and did India proud.”

Congress general secretary Priyanka Gandhi called the government “misogynist” and alleged that women were not respected.  “Our first and only woman Prime Minister, Indira Gandhi is being left out of the misogynist BJP government’s Vijay Diwas celebrations. This, on the 50th anniversary of the day that she led India to victory and liberated Bangladesh,” she tweeted. Congress leader Rahul Gandhi too called out the Union government for not mentioning the former Prime Minister Indira Gandhi’s name during the Centre’s programme on the occasion of Vijay Diwas – celebrated to commemorate India’s victory over Pakistan in the 1971 war.  He also said that Indira Gandhi sacrificed her life for the nation. “A function was held in Delhi regarding the Bangladesh war. There was no mention of Indira Gandhi in that function. The woman who took 32 bullets for this country, her name was not there in the invitation because this government is afraid of the truth.”

This was independent India’s most decisive military victory, leading to the formation of Bangladesh. The failure to mention Indira Gandhi’s name in connection with Vijay Diwas if it was deliberate, was in bad taste and smeared complete polarisation. She should have been given credit gracefully. The creation of Bangladesh was perhaps Indira Gandhi’s finest hour as PM because she had worked simultaneously on three fronts political, diplomatic and military and executed her plan in a shrewd way with a clock-like precision. 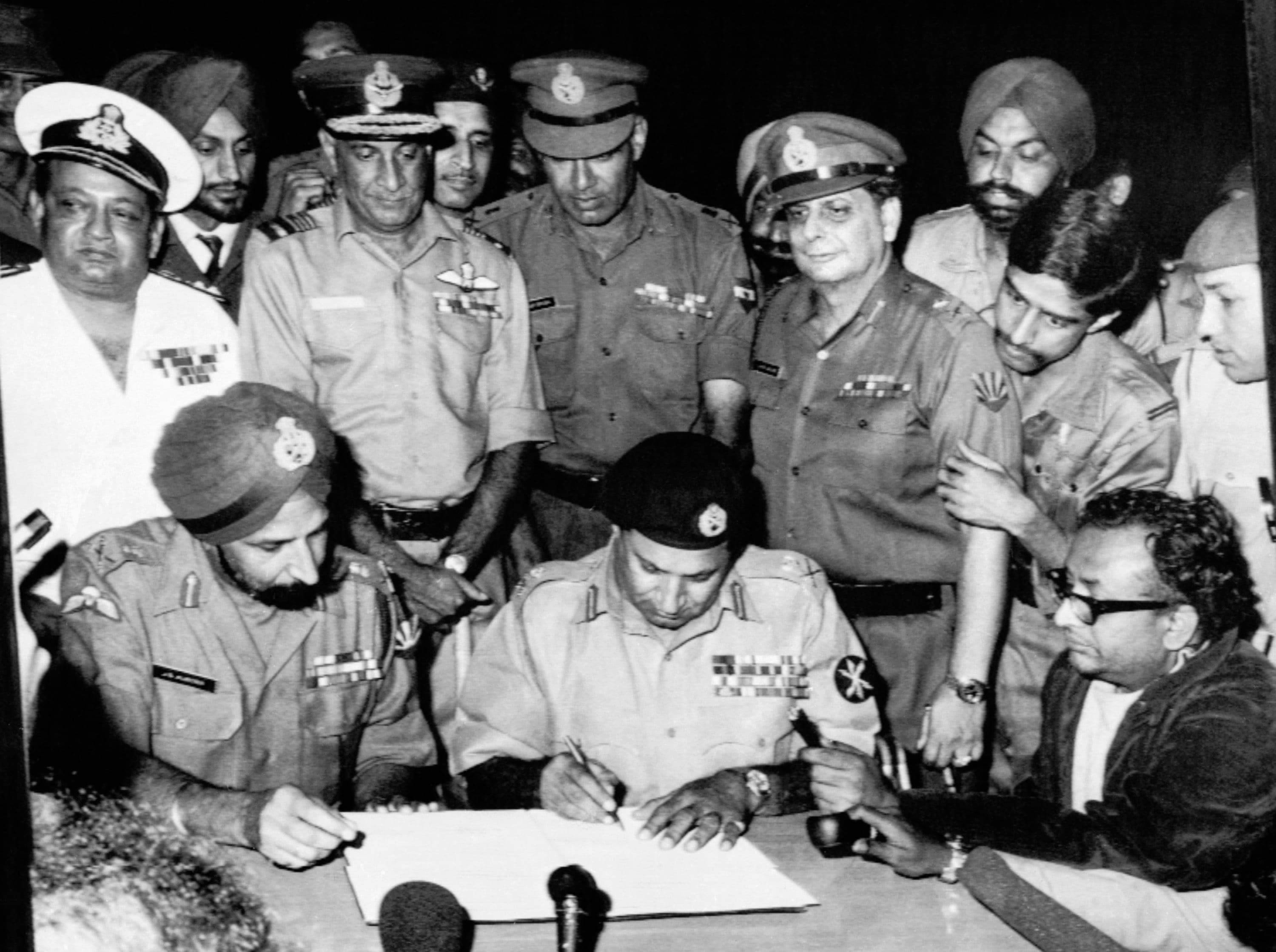 She supported the exiled guerrilla resistance movement, the Mukti Bahini. Her offensive had actually begun when in April, 1971 in anticipation of coming events, she tasked Sam Manekshaw to launch an offensive against Pakistan. She also ensured that the message of
suffering and genocide in Bangladesh was spread amongst the international community.  She herself took a tour of America, UK and Germany to highlight the plight of Bangladeshis.

The 1971 Indo-Pak War began with Pakistan launching pre-emptive air strikes against 11 Indian airbases on 03 December 1971. The war was forced upon due to widespread genocide of people of East Pakistan carried out by an oppressive military regime under General Yahya Khan of Pakistan. The war, which was short and intense, was fought on both
Eastern and Western fronts. The 13-day war resulted in complete surrender of Pakistan forces and creation of Bangladesh. The Indian Armed Forces reigned supreme over the Pakistani military in the battlefield. During the war, Southern Command valiantly defended the borders of the nation against any action by Pakistan. The notable battles which were fought in the area of responsibility of the Southern Army included the famous battles of Longewala and Parbat Ali where Pakistan’s armored forces were destroyed by resolute Indian troops. The raid on the Pakistani town of Chachro carried out by soldiers of the renowned 10 Para Commando Battalion led by Lieutenant Colonel (Later Brigadier) Bhawani Singh, the erstwhile ruler of Jodhpur state was another famous military action.

These battles have showcased the fine examples of grit, determination and bravery of our soldiers. While we remember with pride the victory, conveniently forgetting the role played by former prime minister, Indira Gandhi in the decisive win, is parochialism, to say the least.

(The views expressed are the author’s own)