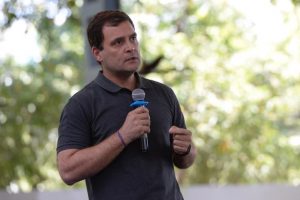 Congress president Rahul Gandhi on Wednesday said that the Congress will change the mood of the country and will move the country to a place where people feel empowered and happy.

During an interaction with students at the Stella Maris College, Rahul said, “You can’t have a negative atmosphere in the country and expect economic growth. Economic growth is directly related to the mood of the country. We will move the country to a place where people feel empowered and happy.”

Rahul Gandhi said that law must apply equally to everyone be it Robert Vadra or PM Modi.

“Law should apply to everybody equally. PM Modi has his name in govt documents which say that he is directly responsible for negotiating parallelly with Dassault on Rafale deal. Investigate everybody,” Rahul said.

The Congress president said, “there is an ideological battle in the country today and they are sharply divided. One ideology is a unifying one that believes, the country should not be dominated by any one idea. No state should feel oppressed.”

While talking about education, Rahul said, “We are convinced that India is spending very little money on education. We will increase the allocation to education to 6%.”

In his dig at PM Modi, Rahul said, “How many times have you seen the PM of India standing here like this, being open to any question from anybody? Why doesn’t the PM have the guts to come and stand in front of 3000 women and be questioned by them?”

“South India is significantly better than North India in the way women are treated. Tamil Nadu is one of the leaders in how it treats its women. However, there is still a lot of improvement required in TN as well,” Rahul said.

Rahul told students at the Stella Maris College, “I want you to remember that as women you have every right to the space that you deserve. You will find in life people who will say you can’t do this, you can’t do that. Never accept that. Always believe in yourself.”