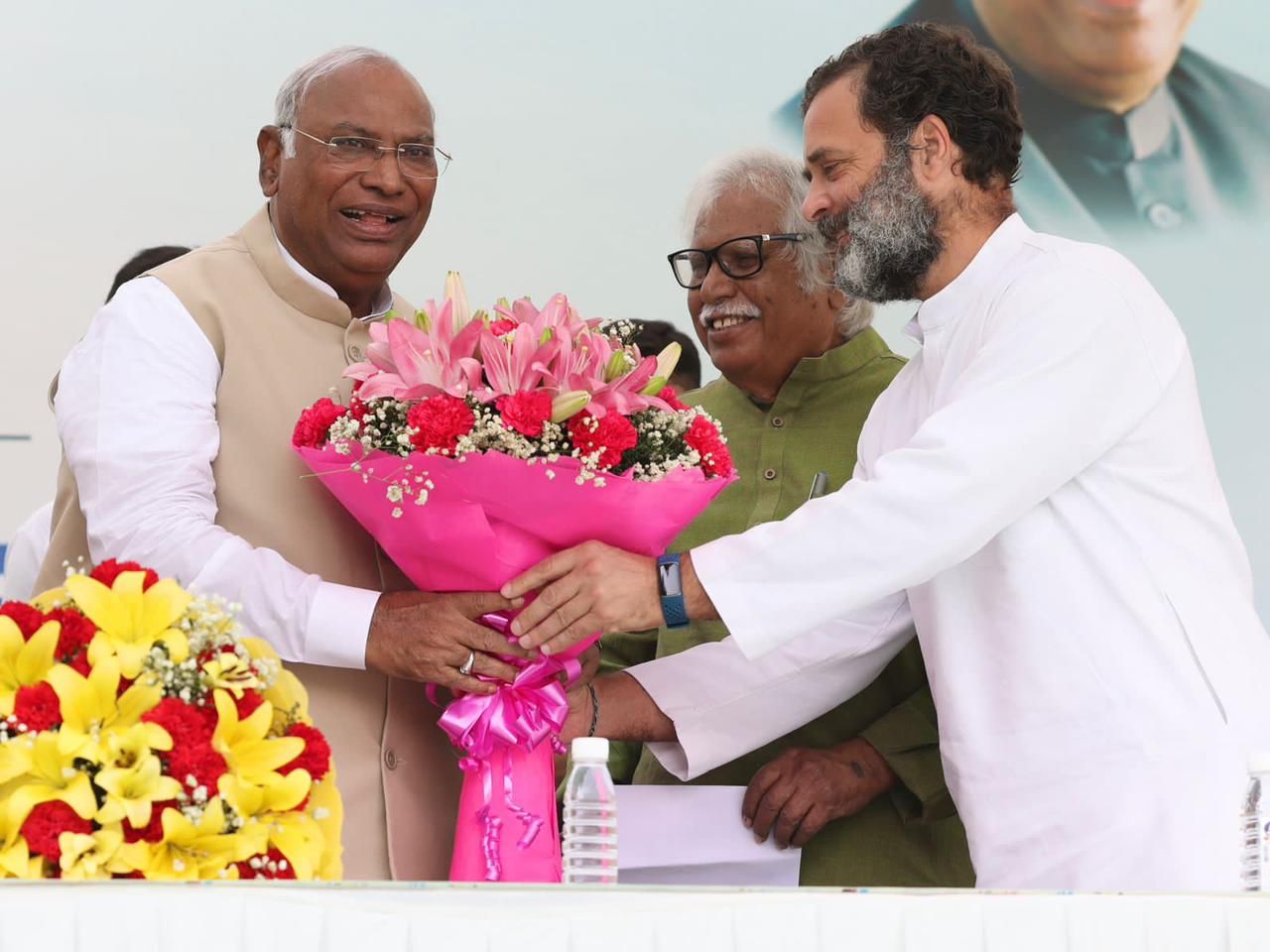 Finally, the Nehru-Gandhi clan has ceded space to a non-Gandhi.  However it is quite clear that the new party chief Kharge will look over his shoulder and always be on tenterhooks.

In victory, Mallikarjun Kharge has proved yet again that he truly is ‘solilada sardara’: a warrior who knows no defeat.

His track record: Contested 12 elections, losing only one.  This time around not only did he trounce Shashi Tharoor but rode to victory with an impressive vote share of over 84 percent.

The suspense has ended as has the will they won’t they question vis-a-vis the Gandhis.

Finally, the Nehru-Gandhi clan did cede space to a non-Gandhi and made way for what Congressmen imagine would be a refurbished Congress.

But have the Gandhis really given up their hold? Will the new incumbent, in this case the 80-year-old Mallikarjun Kharge, actually work independently? Or will he be remote-controlled by the powers that be? Does Congress scion Rahul Gandhi’s statement that his future role will be decided by the newly-elected President hold? Or is it mere optics?

While there are no prizes for guessing this one, it is quite clear that the new Chief will look over his shoulder and always be on tenterhooks. That apart, despite the Gandhi clan publicly stating that they would follow a hands-off policy, past experience has it that their writ will run. Remember Dr Manmohan Singh or even Narasimha Rao’s tenures as heads of Governments?

For the uninitiated, Kharge defeated contestant Shashi Tharoor by a margin of over 7,000 votes. Victory apart, his feat is that he is the first non-Gandhi to assume office as Congress chief after 24 long years.

Judging from a narrow prism, Kharge’s choice sends a positive signal to the Dalit community which is miffed with the Congress because they were denied what they deserved.

Kharge’s appointment may placate them particularly in the poll-bound state of Karnataka, which is Kharge’s home.

Kharge is the second Dalit leader, after Jagjivan Ram, to be the Congress President.

Apart from consolidating the Dalit vote base, Kharge could also act as a bridge between the faction-ridden state unit.

A top contender for the office of Chief Minister more than once, Kharge lost out to SM Krishna in 1999 and later to Dharam Narayan Singh.

When his supporters asked him to stake a claim, he declared that he would never go against the Gandhis.

In 2013 too, he was a mute spectator to Siddaramaiah being sworn in as Chief Minister.

Therefore to say that the Gandhis handpicked Kharge because of his loyalty would be missing the wood for the trees. Quite clearly he was chosen because he is a “safe” bet and would toe the dotted line. In all likelihood, he would be powerless even while being at the helm.

But Kharge is only one part of the story. The other is Shashi Tharoor who even while congratulating Kharge on his victory, did allege irregularities in the elections including “voter fraud” as the Tharoor camp chose to describe the electoral process.

Even while the results were a foregone conclusion and Kharge’s victory was a given, the key was the number of votes Tharoor would score.

Backed by Gandhis, Kharge was unofficially the official candidate. So it remained to be seen whether he would be solidly backed by the rank and file or whether his victory would be merely cosmetic. And it is here that the victory-margin comes into play.

This is not about a numbers-game at all but one that reflects the level of discontent in the Party.

Tharoor, it is well known, was part of the group, popular as G-23, who had demanded a stronger leadership and internal reforms within the Party. In a departure from the norm, 23 senior leaders actually wrote to Sonia Gandhi demanding a complete overhaul of the Party.

Therefore when Tharoor threw his hat in the ring, it was largely believed that his candidature represents the discontent within the Party. Therefore, if Congressmen were really looking for a change they would root for Tharoor.

This despite the fact that Tharoor neither brings in years of experience on the table or knows the nitty gritty of running a vast and complex organisation such as the Congress.

Unlike Kharge, he is not in sync with ground reality. He is elite and has millions of followers on social media: a kind of disqualification for the rank and file. A run of the mill Congress worker, particularly from the Hindi heartland, would be hesitant to approach him. Born in the UK, by Tharoor’s own admission, he speaks “adequate Hindi”.

Yet his adequate Hindi may not be good enough to woo the commonplace Congress worker. Also his assertion that he would bring a fresh set of ideas to the table did not cut ice.

But this is less about Tharoor and more about the questions his defeat throws up.

Is the dissidence for real? Or is it confined to a handful, ambitious leaders who want a share in the power-pie? Were it not so, wouldn’t he, even in defeat, have secured more votes?

The dismal 1000 plus something count in his kitty is nothing to beam about. But Tharoor supporters are smug because the 66-year old fought to the finish.

Going by percentage, Tharoor bagged 11.4 percent votes which his supporters see as “impressive”.

They dig into History and tend to compare the vote count to the party elections in 1997 when Pawar took on Sitaram Kesri. Unlike Tharoor, Pawar did not even touch the 1000 mark. In 2000, when Jitendra Prasada took on Sonia Gandhi, he could not cross a double digit, securing only 94 against Sonia Gandhi’s 7000 plus votes.

But those were different times, and comparisons, therefore, are irrelevant.

Back in those days, the Congress was a force to reckon with and dissidence was perhaps symbolic. A Jitendra Prasada or a Pawar could neither dent the Party nor challenge the Gandhis.

However, 2022 is neither 1997 nor 2000. The Congress fortunes have dipped and the decline is a constant. There is a large-scale exodus with  loyalists like Jyotiraditya Scindia, Kapil Sibal,  Ghulam Nabi Azad and others  snapping  ties with the Party they swore by. Discontent and disillusionment has, perhaps, peaked.

Therefore when Tharoor decided to contest, it was felt that he would get enough support and even if he were to lose, the margin would be narrow.

But his not being anywhere close to Kharge’s landslide victory signalled that the much hyped dissidence was perhaps magnified. As was the move for the Gandhis to give up their hold on the grand old Party.

Otherwise, how does one explain the tremendous support that Kharge got as a Gandhi nominee?  Were the need to replace the Gandhis as strong as the dissidents wanted us to believe, then the first step in this direction would be to defeat Kharge, who was unofficially the official candidate. Or at least help Tharoor to get a decent number of votes and shine even in defeat?

So what is the message of this election?

Simply put, it is that the dissidence that the disgruntled G-23 are talking about is a perception and not a reality. Were it real, then Tharoor would have been where Kharge is and vice versa. In other words, he would be Party President and Kharge out in the cold, as Tharoor now is.