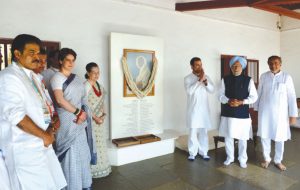 Coinciding with the 89th anniversary of Dandi March to commemorate the anniversary of Mahatma Gandhi inaugurating a new chapter in India’s Independence struggle by launching the ‘Salt Satyagraha’ to Dandi on March 12, 1930, the Congress Working Committee (CWC), Congress party’s top policy-making body, convened its one-day meeting at Ahmedabad The CWC meeting  held in Gujarat after a gap of 58 years, first scheduled to be held in February this year, was postponed in the wake of the Pulwama terror attack on February 14 and the air strikes by India across the Line of Control on a terror camp in Balakot.

Some observers have opined that by selecting Ahmedabad as the venue of CWC meeting, Congress has not only kicked off its campaign for the general election but is looking to send out a strong political message to the entire nation from the land of Mahatma Gandhi and Sardar Patel to project the same to be seen  as a challenge or an act of aggression on the turf of Prime Minister Narendra Modi and Amit Shah and showcase a battle-ready, strategy-rich Congress.

In response to PM Modi’s use of a blog on the occasion to remember Mahatma Gandhi and attack the “dynastic and corruption ridden Gandhi family”, the top Congress brass also harnessed the symbolism of the day to send a message ahead of a crucial General Election. Rahul Gandhi had already projected on March 11 the 2019 elections as a fight between “Mahatma Gandhi’s idea of India and Nathuram Godse’s idea of India”, in a tweet.

The CWC meeting, held at Sardar Patel National Memorial in Ahmedabad, began with a moment of silence for the CRPF jawans killed in the Pulwama attack. The meeting was opened by former prime minister Manmohan Singh, who while highlighting the failures of the NDA government led by PM Modi on the front of economy and employment and the resultant agrarian crisis, slow industrial growth and rising unemployment; also called upon the Congress cadres to recall the achievements of the UPA government on the front of economy, social inclusion and growth to say people need to be reminded of the work done by the erstwhile Congress led government. Dr Singhalso flagged religious and communal divisiveness occurring in the Indian society under the tutelage of the NDA Government.

In veiled references to post Pulwama events, the UPA chairperson Sonia accused the ruling dispensation at the Centre of politicizing issues of national interest. She further added that the PM Modi was playing a victim and the fact is people are suffering because of his policies. Congress spokesperson Anand Sharma said that it was regretful for India that the PM was trying to divide the nation and put the country in a bad light for his political gains. The meeting was followed by Jan Sankalp Rally, which was addressed by Rahul Gandhi.

The CWC authorized its president to decide on electoral alliances keeping in view the larger party goal of defeating the BJP. While posting the photos of the CWC meeting Rahul Gandhi tweeted: “On the anniversary of Gandhi Ji’s historic Dandi March, the Congress Working Committee in Ahmedabad, resolved to defeat the RSS/ BJP ideology of fascism, hatred, anger & divisiveness. No sacrifice is too great in this endeavour; no effort too little; this battle will be won.” The tweet came at a time when the larger opposition is urging the Congress to form potential anti-BJP alliances in states where it is still possible.

Electoral victory of Congress in Punjab assembly polls and better performance in Gujarat assembly polls in 2017 and electoral triumph in three states of Hindi heartland — Chhattisgarh, Madhya Pradesh and Rajasthan — in 2018 under the leadership of Rahul Gandhi proved his political acumen. Rahul Gandhi’s ability to garner support from Dalit leader Jignesh Mevani and Patidar leader Hardik Patel was said to be the key to his Gujarat strategy which saw the Congress giving a run to the BJP for its money in the last state assembly election. Nevertheless, some analysts lament that Congress is seemingly sunk in a complacent stupor in the wake of party-infightings, desertions of regional leaders in the states of Gujarat, Maharashtra, Karnataka etc., which can be said to have squandered the momentum the party had garnered after winning three Hindi heartland states.

These critics also point out Rahul Gandhi’s inability thus far in striking alliances across the country with a view of making every constituency a local election and pitching one consensus candidate against the BJP. On the other hand, they assert the BJP’s strategy of having forged alliance with Shiv Sena and AIADMK and other regional satraps. While disagreeing with this argument, another segment of critics say that Congress president is yet to open up his strategic trump card of forging alliances and having tactical understanding with regional satraps across the country and they are quite sanguine about proliferation of this strategy in days to come, especially after having been authorized recently by the CWC to foster alliances with like-minded parties across the country.

Some analysts have suggested that while continuing perpetual harping on the Rafale deal and the war cry “chowkidar chor hai”(the watchman is a thief) to attack PM Modi, Rahul Gandhi should devote equal emphasis on talking about the real and urgent issues of job creation, agrarian distress, the effects of demonetization to negate the impact of the BJP’s Post-Pulwamanarrative of muscular nationalism. These analysts are sanguine about post-CWC meet Congress emerging as a catalyst for deepening chemistry with the non-BJP Opposition and working out successful arithmetical outcome.

Some observers opine that Rahul Gandhi’s strategy of terming the upcoming Lok Sabha elections a contest between the Congress’ ideology of inclusivity and Prime Minister Narendra Modi and the RSS ideology of fear and hatred, in tandem with his promise of a minimum income guarantee scheme for all the poor in the country if the party is voted to power, holds better prospects for garnering votes for the party, provided this strategy is taken at the grassroots level by the party cadres. .

Prior to the occurrence of Pulwama terrorist attack and Air strike by IAF on Balakot, the electoral prospects of the BJP-led NDA were reflecting downward trends in most of the opinion polls conducted prior to the second week of February this year. However, the post-Balakot manifestation of ‘muscular nationalism’ pioneered by PM Modi with two slogans dominating his rhetoric — hum ghar mein ghus ke maarege and Modi hai to mumkin hai (has proved instrumental in changing the national narrative and diverting public attention from the perennial problematic issues and providing the BJP a strategic edge over its major rivals albeit for the time being. The issue of national security has seemingly gained salience over other issues in the post-Balakot period.

According to a CVoter-IANS poll survey conducted recently in post-Balakot period, unemployment was rated as the most important issue, by as much as 29 per cent of the population in January, but had fallen to 22 per cent after the Balakot strikes; while the importance of national security had gone up from 2.6 per cent in January to 26 per cent in early this March. Undoubtedly, the BJP may expect to make some electoral gains in the Hindi heartland by aggressive projection of its muscular nationalism in the post-Balakot phase; nevertheless, Congress after its Ahmedabad CWC meeting has crossed the tough roads to give the BJP a run for its money. 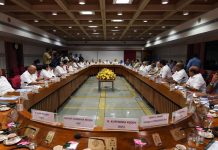