Congress Party President Rahul Gandhi has reached Rajghat in New Delhi on April 9 to lead a nationwide hunger strike to protest against the BJP government’s failures and to promote communal harmony in the country.

Rahul Gandhi along with Delhi party chief Ajay Maken and other workers are observing a day-long fast at Rajhghat over atrocities against Dalits and other important issues.

During the hunger strike at Rajghat the party will bring to light other important issues, including the failure of the Centre to hold a discussion in Parliament on issues such as PNB bank scam, alleged dilution of the SC/ST Act, the CBSE paper leak, Cauvery water issue and Special Category Status to Andhra Pradesh.

Meanwhile, BJP has showing the dual nature of the Congress party. Delhi BJP leader Harish Khurana has alleged that Congress leaders, including Ajay Maken and Arvinder Singh Lovely, were seen eating (Chhole Bhathure) at the restaurant (Chaina Ram Halwai) in Delhi before sitting on a protest and observing fast.

While Congress leaders gave befitted response to the BJP’s alleged remarks. Lovely claimed that the photo was taken before 8 am and he added: “This is symbolic fast from 10.30 am to 4.30 pm. It is not an indefinite hunger strike. This is what is wrong with these (BJP) people, instead of properly running the country; they concentrate on what we eat.”

BJP spokesman Sambit Patra lashes out at Congress and alleged that the party is ‘fooling’ the nation in the name of dalits. He today accused the Opposition party of indulging in divisive politics and “misleading the country with false facts.” 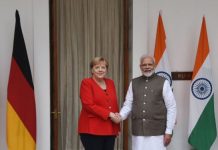