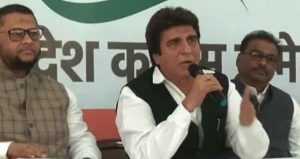 The Congress on Sunday announced that it will leave seven seats for the SP-BSP-RLD alliance in Uttar Pradesh. This is being seen as a reciprocation of the favour SP-BSP-RLD combine did for Congress by deciding not to field any candidate in Amethi and Rae Bareli.

Babbar said the party had earlier held discussions with Mahan Dal and the ally had expressed satisfaction with whatever seats Congress gave them.

“All they want is to contest the Vidhan Sabha elections. For the Lok Sabha polls, they had said they will contest on our symbol,” Babbar added.

Congress also announced an alliance with Jan Akhikar Party (JAP), which will fight the election on seven seats, out of those seven, JAP will fight on five and Congress on two.