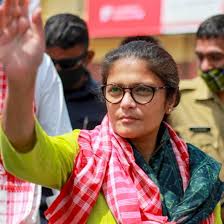 The prominent congress leader and head of Congress’s women’s wing, Sushmita Dev, resigned from the party on Sunday.

Without giving any specific reason in her letter to party president Sonia Gandhi,  she resigned from the party’s primary membership.

Sushmita was being unhappy with the party’s performance in Assam polls. According to the sources she may be moving to the Trinamool Congress but there is no confirmation of this.

Congress leader Randeep Surjewala said, “She was a dedicated Congress worker and perhaps is, even today. Congress president Sonia Gandhi has not received any letter from her. She’s mature enough to take her decisions. I can’t comment until I speak with her.”