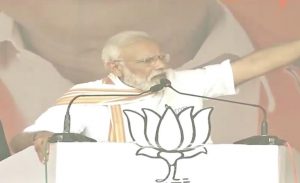 Prime Minister Narendra Modi on Tuesday stepped up his attack on the Congress, saying, they have done injustice with four generations of this country.

Continuing his attack at the opposition parties, Modi said, “Just like air strike, they also raised questions on strike in the space. They didn’t have the courage to sanction missile tests. They neither respect soldiers and nor science. It’s about time to teach a lesson to such parties and people.”

“For votes, Congress has divided the society based on religion and caste. They did same in Karnataka during state assembly elections. On one hand, you have appeasement of Congress and JDS, and on the other hand, you have BJP that believes in Sabka Saath, Sabka Vikas,” Modi added.

“No one knows who’s running Karnataka’s government because both of the defeated parties have come together for the power in the state,” Modi said at a rally at Chitradurga, Karnataka.

“We are committed to providing house to every poor, electricity to every household, LPG connection to women. In our manifesto, we have promised that we will make changes in the current scheme and all farmers, irrespective of small or big, will benefit from PM Kisan scheme. Chowkidar believes in delivering results,” PM Modi added.

Modi further said, “the current state government promised to waive loans of farmers, but they failed to live up to it. Instead of loan waiver, they issued warrants. Congress did injustice with capability, resources and dreams of the country. We did not deserve such government.”