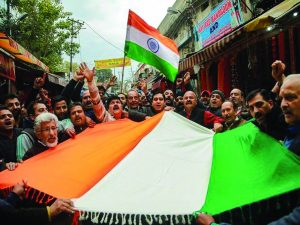 Aftermath of recent Pulwama terror attack has now attracted sharp criticism of the Modi government from all the rival political parties. Congress leaders cornered him through series of tweets just after a week of mourning. Congress party swung into action with loaded questions targeting alleged intelligence lapses and lack of empathy of the Modi government towards the security forces.

Forty CRPF jawans martyred in dastardly terror attack in Pulwama area of Jammu and Kashmir and the Gandhi siblings were found first to be present to pay homage at the Delhi airport and at the doors of martyrs, ahead of Modi in Uttar Pradesh.

Despite intelligence alerts of possible terror strike, the government completely failed to act timely to avert the Pulwama attack on CRPF troops killing our 40 brave soldiers besides leaving many injured. After Uri attack on Army headquarter of 12 brigades in 2016, it has once again exposed the unpreparedness of the government to prevent reoccurrence such well-planned terror attacks.

Congress spokesperson Randeep Surjewala passionately attacked Modi for “misdirected urgencies” and “not giving the attack its due importance”. Making shocking revelations he further alleged, “When the entire country was mourning the deaths of the jawans, Prime Minister Modi was shooting a film at Corbett National Park for Discovery channel and indulging in a boat ride to look at crocodiles.”

“It is horrific that till four hours after such an attack, Modi was busy with his own branding, photoshoot and snacks,” Surjewala tweeted. He also alleged that the shooting went on till 6:30 pm on 14 February and that thereafter PM had tea and snacks at 6:45 pm.

Politicking is at its peak a week after Pulwama attack as the Congress trained guns at Modi, accusing him of continuing shooting for a “publicity and propaganda” documentary at Jim Corbett even after the information of terror attack and reached last at the airport to give homage to the martyrs keeping everyone waiting for his arrival.

Rahul Gandhi tweeted on 22 February, “Even three hours after the news of the martyrdom of 40 soldiers broke, the ‘Prime Time Minister’ continued to shoot a film. Even as the country and the martyr’s families were drowned in an ocean of pain, he (PM Modi) continued to laugh in his photo-shoot.” He added, “Modi Took 3 hrs To React. First Shoot, Rally, Then Tweet.”

Congress president also attached some photographs of Modi attending the photo-shoot and taking a boat ride in the scenic hilly state. Initially, BJP refuted his claim as “fake news” and clarified that the photographs were taken in the morning of 14 February, but one of the photo has been shared by Vishwaketu Vaidya, social media convener of Nainital BJP taken in the afternoon at 1.52 pm informing that the PM Modi has left for Dhikala zone of Jim Corbett Park. Later in the evening Union Minister Ravi Shankar Prasad, while addressing media on Congress’ allegations, said, “India will not stop, and should not stop, for the sake of terrorists.”

Congress leaders are questioning that was a political rally more important than giving a response to the public on the terror attack? Priyanka and Rahul Gandhi participated in the prayer meeting of terror attack martyrs Amit Kori in Shamli district in UP  where a function was organized at the Raghunath temple in memory of the soldier.

Amid chants of ‘Amit Kori Amar Rahe’ and ‘Bharat Mata Ki Jai’, the Congress chief Rahul Gandhi said that he understood the pain in people’s hearts. “My sister said, in a way, the same happened to our father,” he told the family members.

Rahul and Priyanka were seen consoling the members of the bereaved family. While Priyanka Gandhi spoke to the females of the family and took their phone number, Rahul Gandhi said he was sad as well as proud of Amit Kori. “In these moments of grief, we are with you. His father told us that he is sad, but at the same time proud of his son. The family gave their entire life for their son and the son gave his life for the country. The entire country wants to thank you for the sacrifice your son has made. The son gave his love, body and heart to the country. We can never forget this sacrifice,” Rahul Gandhi consoled.

The UP Sugarcane Minister Suresh Rana was also present in the prayer meeting, but was overshadowed by presence of congress heavyweights. The Gandhi siblings were accompanied by Jyotiraditya Scindhia and state Congress chief, Raj Babbar and travelled by road to the place with his large cavalcade of local supporters. The Gandhi siblings then went on to visit the house of Pradeep Kumar, another CRPF jawans who lost his life in the Pulwama terror attack. Among the 40 CRPF soldiers killed in the attack, 12 hailed from Uttar Pradesh, including two from Shamli district of the state.

Samajwadi Party (SP) chief Akhilesh Yadav also pushed Modi government to corner over the death of soldiers, asking, “What is the government waiting for.” “Till when will the three day period of mourning keep getting extended? Every day we get news of the brave martyrdom of our jawans while smiling BJP politicians accompany their funeral processions. Why is the government waiting and watching?” he tweeted. His tweet also tagged a news report with the headline “Four Army personnel including Major martyred in encounter with terrorists in Pulwama.”

Bahujan Samaj Party chief Mayawati, meanwhile, advised PM Modi that he should put off all his political assignments and find out who were the real perpetrators behind the blast and reach to the roots of it. “All the political parties have stood behind him in crisis hours before the nation. Prime Minister must stop his selfish and vindictive politics and find out permanent solution to this problem to establish peace and harmony by taking the support of international community,” she added.

Uttar Pradesh witnessed large-scale protests all over the state that lost 12 brave hearts in the Pulwama terror attack. People flying tricolour in their hands with candlelight came out to oppose killing of our forces as soon as they got the shocking news. Public-spirited citizens openly criticised the failure of security agencies despite timely intelligence inputs from various agencies. All the political leaders have started visiting the homes of martyrs of the state in their vicinity and area of influence. 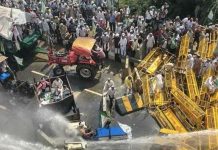