Former Haryana Chief Minister and leader of opposition in Haryana Vidhan Sabha Bhupinder Singh Hooda while talking to media as regard Congress completely wiped out from power in Punjab was of view exit of former Punjab chief minister Captain Amrinder Singh from party prior to Vidhan Sabha polls was prime reason for party’s downfall in Punjab state. There is no doubt Hooda was a successful chief minister in Haryana state for about a decade, but Modi wave spread across the country wiped out Congress government in the state led by Hooda who during media discussion admitted, accepting resigning of Capt Amrinder Sing by high command prior to Vidhan Sabha polls was a wrong decision and in case Congress high command wanted to remove Capt Amrinder Singh the decision should have been taken about two year prior to polls. He admitted,  Congress in Punjab state would have never lost government in case Capt Amrinder Singh would have been chief minister.

On a question, if he is attempting to fill up gap between G-23 group of dis-satisfied senior Congress leaders and the high command Hooda said don’t call them G-23 group but Great G-23 group and all differences will be over shortly. When asked about political activities by Aam Aadmi Party (AAP) trying to expand its network in Haryana state and have already joined hands with few heavy weight political leaders in the state as well Arvind Kejriwal himself screening many dis-satisfied BJP as well prominent leaders from other political parties in Haryana, according to Hooda, there will not be no effect in political activities by Delhi chief minister Arvind  Kejriwal surrounded by Haryana state from three sides and according to him Kejriwal will be able to win hardly few seats in coming Vidhan Sabha polls to be held in 2024.

According to senior political leaders, decision by AAP chief minister approved proposal in Vidhan Sabha session soon after forming government in Punjab having claim over Chandigarh and making large number of developmental announcements by chief minister Bhagwant Maan in a short period after forming new government to attract public attention in Punjab has not only disturbed people in Haryana but has compelled people in Punjab to think from where funds for such a large number of announcements will be arranged when Punjab government is already burried under heavy debts and chief minister soon after taking oath has started making demand from Prime Minister for financial assistance by Union Government.

After former Haryana chief minister late Ch. Bhajan lal , Bhupinder Singh Hooda is generally known as  mastermind for forming as well as falling a government in the state. In reply to a question as regard downfall of Congress government in Haryana state in 2014 Vidhan Sabha polls Hooda said if right selection of candidates to contest polls would have been made today Congress have been in power in the state, however in-spite of BJP ruling in the state and availing all types of facilities by the government Congress was able to get 31 seats in 2019 Vidhan Sabha polls and BJP had to seek JJP help to form government in Haryana.

Hooda said, Congress high command has failed to have party elections since past sight years elections which are now likely to be held in month July-August this year to form a new body in the party in national as well as state level. In a direct question if he is likely to have a national level senior position in Congress high command or Congress president in the state since he is favourite among majority of Congress  MLAs not only in Haryana as well as national leaders, Hooda refused to become party president in the state saying he is satisfied with his present portfolio as leader of opposition in Haryana Vidhan  Sabha.

As regard national level changes in Congress high command and his name also expected in a national level position, avoiding to make any comment Hooda said we cannot forget sacrifices of Nehru family for the independence of country, moreover  he has no desire to hold any senior level position in party high command when there is a long list of senior leaders in the party including Gulam Nabi Azad, Anand Sharma, Kapil Sibbal and many more deserving senior position in the party. Hoods refused to say anything as regard differences in senior level party leaders in Haryana state saying it is a part of politics in every state, as such every thing is normal and there is no rift among Congress leaders as such. 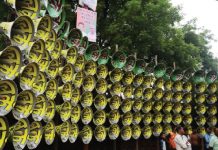