“I invite you (Yeddyurappa) to form the government and be sworn-in as the next Chief Minister of Karnataka,” a Raj Bhavan communique said. Governor also asked Yeddyurappa to prove his majority in a floor test within 15 days of swearing in as CM.

Addressing the media, Congress spokesperson Randeep Surjewala said, “The governor has shamed his office.””Amit Shah and BJP today sanctioned an encounter of the constitution and the law. Governor has subjugated the law and shamed the office of governor and I don’t think such a person has the right to continue. We will use all legal and constitutional rights available to us,” Mr Surjewala added.

JD(S) leader HD Kumarasway said, “By giving 15 days time, governor is encouraging horse-trading by BJP leaders, this is unconstitutional. We will discuss the future plan.”
Senior BJP leader and Union Law Minister Ravi Shankar Prasad responded, “The party that blew up the constitution to shambles is teaching us the constitution, the party that imposed President Rule the most number of times is giving us lessons.” 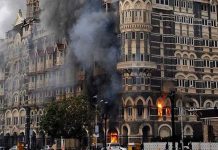