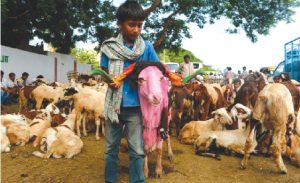 In recent years, as Eid-ul-Adha nears, the right-wing brigades make it a point to unleash communal virus against the Muslim community in the country. They use it as yet another alibi to spread poisonous propaganda and with that hound and harass the Muslims in the country.

I have been seeing this trend accelerating, so much so that apprehensions and fears compound for the Muslim community as Eid-ul-Adha nears. Why? Because this Eid revolves around the qurbani/ sacrifice of a lamb or sheep or goat. Adha, meaning the ‘festival of the sacrifice’, this Eid centers around Prophet Abraham’s sacrifice — when he was asked by the God to sacrifice his son, he agreed to go ahead with the sacrifice, not aware that it was a mere test for him. Instead of his son what lay slain was a sheep. Thereafter, this tradition has carried on, un-interrupted … down the centuries.

Here in our country, this tradition was ongoing without any apparent hurdles till the poisonous propaganda against the Muslim was made to get vicious and downright communal.

It started off by spreading the notion that the Muslims devour meaty chunks and kababs all day long. Mind you, this propaganda that all Muslims go about with big fat botis tucked in rotis, has been gaining ground, portraying them as modern day ‘adamkhoors’ / Cannibals!

Together with this, came along the beef alibi, to hound and lynch the Muslims. Needless for me to go into details of how in the last five years, Muslim men and even young boys in the country have been targeted, killed and even hung from trees by the lynch brigades …The ‘beef scare’ has also impacted the socio-cultural patterns. When I asked a middle class Muslim family why no meat dish was served in their son’s wedding celebrations, I was told, “Who will prove to Hindutva brigades that it’s not beef but mutton and chicken! We didn’t want these goons to disrupt the shaadi, so only vegetarian fare served! What to do …we have to live in this haal, with the new halaats spreading out in the country!”

This ‘beef’ alibi was also used to attack the Kashmiri Muslim students studying the educational institutions of the country.One such incident after another. We all saw shots of the plight of the four Kashmiri students studying in Rajasthan’s Mewar/Chittorgarh region. They were made to stand as  though they had committed a heinous crime. All that they done was to buy 300 grams of mutton from the local market. That was enough to trigger off beef rumours, leading to their detention and public humiliation.

And now the so called ‘meat’alibi is used by the political rulers to see to it that many more slaughter houses and meat shops are closed if not permanently sealed and shut. With that many more men will sit unemployed and many more homes wrecked in the aftermath.

And in the midst of this mess, it very crucial to clear few basic misconceptions or myths. The fact is that the Indian Muslims are not the biggest buyers and consumers of meat in India. A high percentage of non-Muslims are meat consumers. Also stands out the fact that the meat industry in the country is controlled by non-Muslim traders.

Also, stands out the fact that the meat industry in India is one of those traditional industries which provides jobs to hundreds and thousands of our poor, both Muslims and non-Muslims. In fact, Fauzan Alavi, heading APEDA (All India Meat and Livestock Exporters Association of India), detailed during the course of an interview, that a substantial percentage of workers in the meat industry are non-Muslims.

And much against the hyped propaganda against the Muslim community that they consume only non-vegetarian food, let me focus on the fact that the significance and importance of fruits, vegetables, herbs has been highlighted in the Quran and also in the Hadith .

In fact, I have before me two books written by the Lucknow based botanist, Dr M.I.H. Farooqi. The very titles of these two books — ‘Plants of The Quran’ and ‘Medicinal Plants In The Traditions of Prophet Muhammad’ (Sidrah Publishers) — relay the significance of plants, herbs, fruits, grains, spices and vegetables in our daily intake.

This botanist has quoted extensively from the Quran and the Hadith (sayings of Prophet Mohammad). In the ‘Plants of The Quran’, plants and plant-products mentioned in the Quran have been highlighted, in the context of their botanical identification, medicinal properties and the health benefits they carry. And the volume ‘Medicinal Plants in the Traditions of Prophet Muhammad’ is a scientific study of the medicinal, food and aromatic plants mentioned in the Traditions ( Ahadith), of the well -known collections of Bukhari, Muslim, Tirmidhi, Abu Dawud, Ibn Maja, Nasai.

Also, stands out the fact that many Muslims like me are vegetarians or semi -vegetarians by choice. On an Eid evening, when I visited the home of scholar Maulana Wahiduddin Khan, there was no meat dish on the table. Curiosity hitting to such an extent that I to ask him the ‘why’ to it. “Because I ‘m a vegetarian. Though the family eats gosht but I don’t…I’m hundred percent vegetarian.”

To eat or not eat gosht are personal choices and cannot be controlled by the political rulers of the day. They have no business to spread such vicious rounds of poisonous propaganda that even young Muslim boys are targeted and killed because of the hate propaganda. If you recall over three summers back, sixteen year old Mohammad Junaid was murdered by fellow passengers, right inside a train compartment of the train taking him and his brothers to their home in a village in Haryana’s Ballabhgarh, with ‘beef -eater’ taunts thrown on his fractured skull, with a skull cap atop it.

And if one were to converse with butchers and meat-suppliers, they will tell you that more than the Muslims, it is the non — Muslims who are buying meat and consuming meat- products … Butchers will also focus on this age old theory: if food is denied to a person, he will either perish or react!

Today, with hundreds sitting all too deprived and hungry, there is every possibility of hunger and malnutrition related deaths going up the graph. Also, with poverty and unemployment levels mounting, many more could be affected by the rising social disorders.

Leaving you with this verse by Kashmiri poet – Mahmud Gami –

“I asked the butcher the meaning of love’s art /

He said –‘tie thy heart with the fork of love /