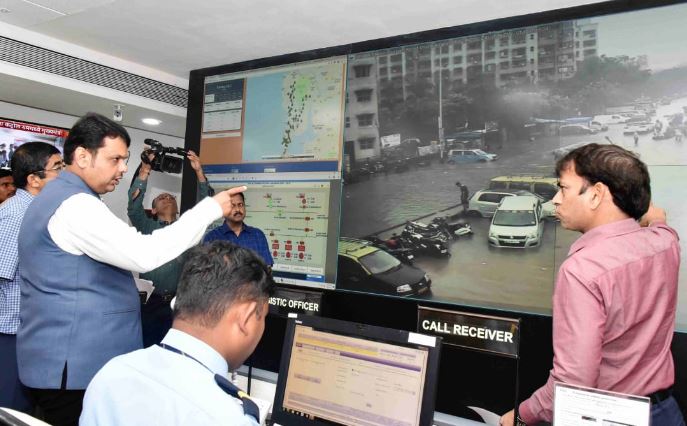 Mumbai : It is raining very heavily in Mumbai and its suburbs since the last two three days. Besides this, the Meteorology Department has warned very heavy downpour of rains. The CM Devendra Fadnavis today directed the Greater Mumbai Municipal Corporation, Police Department and the State Government Machinery to take emergency measures since the Monday night showers resulted in mishaps while the water logging at some locations resulted in the citizens running helter and shelter. The CM has appealed the citizens not go our of the house without any compelling reasons. .

The CM today visited the Disaster Management Cell of the Greater Mumbai Municipal Corporation and reviewed the working there.

BMC Commissioner Praveen Pardeshi informed the Chief Minister the arrangements effected at various locations in the city by the Municipal Corporation to prevent water logging. He also informed that the work of extracting the water in the low lying areas of the city through pumping is in progress.

The CM directed the Municipal Corporation and the Disaster Management Cell to keep a close watch on the wall and tree falling and water logging incidents in the city and take measures to ease the Local services of the Central Railway and to ensure that the public is not needed to run helter shelter.

The CM also directed the Municipal Corporation to adopt modern technologies to convert the wet waste in the city into compost manure within the next eighteen months. There are seven pumping stations in the city to remove the logged water out of which five are functioning. The CM directed to convert the remaining two pumping stations at Mahul ( Chembur ) and Mogara ( Jogeshwari on mission mode. .

The Chief Minister appraised himself of the new app developed by the Mumbai Municipal Corporation. he also took note of the Meteorology Department’s forecast for very heavy rain pour in Mumbai, Marathwada, and Vidarbha in the coming two to three days.