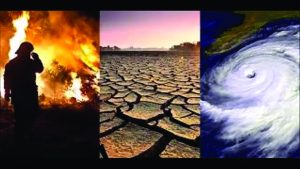 Climate change, as the world’s leading climate scientists have recently warned, is an existential threat to the human race. The earlier we realise and act on it, the better. The latest report by UN Intergovernmental Panel on Climate Change (IPCC) – which suggests that after 2052 even a half degree increase in global temperature will lead to searing heat waves, heavy rainfall, droughts, floods and other extreme weather conditions that will lower agricultural yield, cause food and water scarcities and push millions into poverty – must ring an alarm bell for the policymakers.

The problem is that we have been conditioned by unparalleled growth to expect that there are no catastrophes that are insurmountable. We think even apocalyptic science fiction deals with bands of survivors who, by definition, survive. Imagining ourselves among them puts us in a passive mode. In the real world, calamities do take a toll on one and all. The Kerala floods, which affected more than five million people and killed over 200 in August, is enough indicator that climate change is already here. Cyclone Titli, which impacted more than three lakh people in eastern India, is yet another pointer that India need to act fast.

Sadly, India is the 13th most vulnerable country to climate change. Since more than 60 per cent of its agriculture is rainfed and it hosts 33 per cent of the world’s poor, climate change will have significant impacts on the food and nutritional security. The country, according to the UN Office for Disaster Risk Reduction, witnessed $79.5 billion in economic losses between 1998 and 2017 due to climate-change disasters.

According to a study by the India Meteorological Department, India saw 285 flooding events between 1950-2017 that killed 71,000 and drove 19 million into homelessness. Such developments only add to the woes of the country, where more than 270 million people continue to live below the World Bank’s poverty line of €1.90 (163) per day earning.

On financial front, India is among the top countries to face maximum economic loss from climate change. According to a study published in the scientific journal, Nature Climate Change, India’s country-level social cost of carbon was estimated to be the highest at $86 per tonne of CO2, which means that Indian economy stands to lose $86 from emitting each additional tonne of CO2. This roughly accounts for nearly 21 per cent of the global social cost of carbon.

The country may face a far greater risk in terms of human costs and impact on development if nothing is done to curb its impact, a major study has pointed out. As a lower-middle income country, economic losses mean “crippling consequences” for future development. An alarming number of people are now internally displaced every year by extreme weather events and climate-related disasters often losing their homes and their livelihoods, the report highlighted.

India, along with others, must make rapid, far-reaching and unprecedented changes across sectors to stop the devastating consequences of climate change. Else, as per the IPCC report, the world won’t be able to meet its 2015 Paris Agreement commitment to keep the average global temperatures “well below” 2°C.