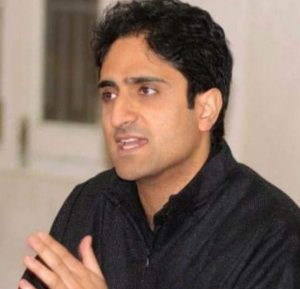 Indicating a difference of opinion among  the ranks of National Conference  over the boycott of the upcoming Municipal Bodies and the Panchayat election, the NC spokesman Junaid Mattu on Tuesday decided to resign from the party and contest Municipal polls from Srinagar.

“Based on my humble disagreement with the party’s decision to boycott the upcoming ULB and Panchayat Polls, I have just sent my resignation from the party to the JKNC General Secretary,” Matoo posted on his Twitter handle.

“I strongly believe that leaving our grassroots democratic institutions open to misrepresentation would inflict serious harm on the state and also wreak havoc with our social fabric and cultural legacy”.

Mattu said he will announce his candidature for the polls on Wednesday.

“I will announce my candidature for the ULB elections from Srinagar tomorrow isha Allah and I remain committed to serving my people and helping the city I grew up in meet the challenges it’s faced with. I won’t be addressing the media or taking any questions today”.

The development has surprised the Valley considering Mattu is the spokesman of the NC.

Early this month, National Conference president Dr Farooq Abdullah has decided to boycott the local polls citing legal threat to Article 35A which grants special citizenship rights to the people of the Valley and bars outsiders from settling and buying property in the state. In fact, Abdullah threatened to boycott even the Assembly and parliament elections if the Centre does not take “effective steps” for protection of Article 35.

“We are not afraid of elections, neither we are running away from this process, but first do justice with us,” Abdullah told reporters at the time. “Today everybody in Kashmir, whether a shopkeeper, hotelier, labourer, taxi driver, shikarawala, ponywala, others  are perturbed that the Article 35A will be tinkered with after the elections. So we can’t participate in the process until we get an assurance’’.

Similarly, the PDP has also boycotted the civic polls for the same reason. The party’s leader Mehbooba Mufti has also sought assurance from the centre on the Article 35A before it would participate in the election.