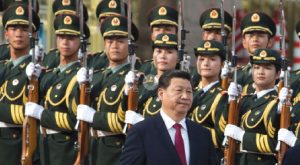 It was a perfect script, well-designed, an Asian power i.e. China under a totalitarian Communist regime, dreams to steer the world on its own terms, dares USA to bid for a super power status. Amidst the unprecedented deaths since the end of the World War-II in 1945, caused by the pandemic, Covid-19, believed to be released from a Chinese facility, the contemporary world, especially USA feels beleaguered, if not helpless.

America, which has been enjoying unquestioned super power status following the collapse of the Union of Socialist Soviet Republics (USSR) in September 1991, finds itself overwhelmed with the series of the Chinese moves on the chess-board of the world politics. China appears to have succeeded in challenging the nearly three decades of the US hegemony in the international affairs.

In this ongoing war game played amidst the pandemic exposes the unpreparedness of the western powers, especially USA. The vulnerability of its systems, which were first time challenged during the terrorists attack on twin towers in New York and Pentagon on September 11, 2001, after the Japanese air strike of Pearl Harbor on December 7, 1941. The US administration was stunned, and the world shocked.

The world realized that USA’s security systems could fail to respond fail in a crisis situation. The ongoing pandemic has further exposed the much-trumpeted invincibility of USA, both in technological and strategic terms, if it has not become dysfunctional. In the case of terrorists attack, American war planes destroyed the terrorists’ hideouts across Afghanistan. However, the fatal spell of pandemic is yet to be effectively tackled, but it gave an opportunity to China to adopt a belligerent attitude, ignore world opinion.

The Chinese have gone ahead amidst the pandemic with their political, economic and strategic agenda, when USA is busy in electing a new president. It appears that there is hardly any cohesion in the American political establishment to workout effective strategies in wake of the Chinese pressure. It is sad that neither the present incumbent, Donald Trump of the Republican Party, nor his rival, Joe Biden (Democrat) has spelt out any focused approach or any substantive initiative to curb the Chinese march to its dream status of becoming a super power.

The variety in approach and lack of political will to tackle the challenge has emboldened China. They are confident that they would be ultimately able to assert irrespective of the outcome of the polls. They have already calculated that their march to become a super power faces hurdles, but with their deep penetration in the systems of the free world, they are confident that who so ever wins, whether Donald Trump or Biden in this presidential race for power, they will succeed.

The era of sweet cooperation between US and China might be over, but indications are that the Chinese president Li Jinping has calculated with the substantial trade package offer to the new US president would normalize their relationship. Meanwhile, the Chinese diplomats have reportedly told their friends in Myanmar, Nepal and Pakistan that the anti-Chinese rhetoric will end once the US elections are over. It means, China is following its well-designed power game based on its traditional version of chess called Go or wéiqí, which enables a player to overwhelm the rival both by the moves as well as by using psychology.

Embolden by the USA’s failure in evolving a common policy to contain China, Pakistan’s foreign minister Shah Mehmud Qureshi stunned his country’s closest ally, Saudi Arab, and within a few days of his anti-Saudi statement travels to China in the third week of August 2020 to sign new agreements ensuring unrestricted flow of funds. It was not an unscheduled visit as many Pakistani political observers claim, but it was the follow-up of the strategic alliance and huge financial support with China worked out during the April 2020 visit of Prime Minister Imran Khan and the army chief Qamar Javed Bajwa to China. The Chinese stood by their assurance with prompt financial assistance to Pakistan, when Saudi Arab demanded the repayment of its loan. Within two weeks of this gesture, Qureshi inks agreements with his counterpart in Beijing.

With the signing of the agreements, Pakistan can now easily resist the US pressure. It has decided not to succumb to International Monetary Fund (IMF) and Financial Action Task Force (FATF). Thus, the clever Chinese succeeded in failing the west’s efforts to persuade Pakistan withdraw from the ongoing Chinese investments.

The donor agencies were keen that the terms and conditions of the Chinese funds should be explained, but Paksitan has refused to share any details about the Chinese investments. Meanwhile, 13 projects costing US $11 billion, M-5 (Multan to Sukkur Motorway), 2×660MW Port Qasim Coal-Fired Power Plant, 50MW Dawood Wind Farm, and 100MW Jhimpir Wind Farm have been completed.

China has also assured Pakistan that it would set up chain of industries to absorb the Pakistani labour force currently serving in the gulf countries. In this backdrop, it is not surprising that Pakistan considers it a right time to shift its tilt towards China. Chinese consider Pakistan’s strategic importance, which is like Israel to the west.

The arrival of the Afghan Taliban delegation to Islamabad for further discussion to usher in peace in the strife-torn country could be having the Chinese blessings. It appears China is poised to replace USA in the region. It also ends the two centuries of resisting Russians and Chinese access to the warm waters of the Arabian Sea.

The Chinese naval and other ships will now have unrestricted access to the ports of Gwador in Baluchistan (Pakistan) and the Chabahar in Iran. In the South Asian region, the US decision to clamp economic restrictions on Iran too boomeranged.

It also gave huge setback to India’s growing relationship with Iran, if not ended. Under the US pressure, India lost her strategic initiative of setting up the Chabahar sea-port and a railway line ending Afghanistan’s sole dependence upon Pakistan. It is the fall out of Trump’s so-called aggressive policies. Amidst the noisy American rhetoric, China may quietly succeed in installing a friendly pro-Chinese government in Kabul.

It is difficult to find faults with Li Jinping’s approach in tackling USA, especially with a country, where China owns substantial properties, access to technology and media. He is convinced that the Trump’s anger against China would end in a fiasco.

China offers US $400 billion package to Russia. It gave the much needed financial support to Russia, which had surplus crude oil due to the reduced supplies to Europe that too under the US pressure or advice.

With its strong grip on the countries from Cambodia, Myanmar to Iran, China has almost ended the US influence in the region. The decision of Pakistan to ally with China finally ends the strategic planning of the west to contain China and Russia from entering the region.

It may be recollected that at the Potsdam summit held soon after the world War-II, Winston Churchill, the British prime minister, had told the US president, Franklin D. Roosevelt, who was apprehensive of India’s partition, that a Muslim India i.e. Pakistan would be helping the western powers to stop the march of communism in the region.

Thus, a country carved out to serve the strategic interests of the west, now is officially in the camp of the communist China.

It is yet to be ascertained whether USA and the west are serious to tackle the Chinese challenge. The Chinese companies have huge investments in real estate in USA, have a sizeable share in the nuclear power houses in United Kingdom (UK), and now Germany allows 5-G services to a controversial Chinese major, Huawei, ignoring the US advice.

In this context, India has to pursue the policy of extreme caution. With these knee-jerk policies of the west, it is natural for the leaders of the middle kingdom to go ahead for new global strategic alliances before the new US president is installed next year.