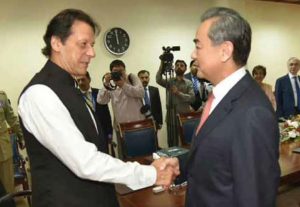 With cricketer-turned politician Imran Khan taking over as Pakistan’s Prime Minister with the support of some religio-political parties and others, voices began to be heard that the deal for the China-Pakistan Economic Corridor (CPEC) might be renegotiated as it was considered not being in the long term interest of Islamabad. Those who thought on these lines must revise their opinion now. They were hoping against hope. The new government in Islamabad has re-emphasised the significance of the China factor in Pakistan’s foreign policy with CPEC to remain as its component.

Khan highlighted his country’s all weather friendly relations with China during a meeting with Chinese Foreign  Minister Wang Yi, who visited Islamabad soon after the change of government in Pakistan. In Khan’s own words, “Friendship with China is a cornerstone of Pakistan’s foreign policy”. The two leaders described CPEC as being of “mutual benefit of the people of both countries”. However, third country investors will also be invited to join the $60 billion project, which will acquire two new aspects to it — socio-economic and regional development.

New calculations began to be made with regard to CPEC’s future and the China factor in Pakistan’s foreign policy after the UK’s Financial Times carried a report quoting Khan’s Adviser on Commerce Textile, Industry & Production and Investment Abdul Razzak Dawood. The report had it that “the previous government did a bad job negotiating with China on CPEC; they didn’t do their homework correctly and didn’t negotiate correctly so they gave away a lot.”

In Dawood’s opinion, “Chinese companies received tax breaks and have an undue advantage in Pakistan; this is one of the things we’re looking at because it’s not fair that Pakistan companies should be disadvantaged.”

Elaborating his viewpoint, Dawood pointed out, “I think we should put everything on hold for a year so we can get our act together. Perhaps, we can stretch CPEC out over another five years or so.”

Dawood’s remarks could not be taken lightly as he is a renowned businessmen, who founded Descon Engineering, involved in engineering and construction, chemical, power and inspection projects and, perhaps, the first Pakistani multinational operating in six countries.

The Pakistani leader’s clarification that he was quoted out of the context was not taken seriously till Imran Khan reiterated his government’s commitment on implementing the CPEC deal during the Chinese Foreign Minister’s visit to Pakistan. China, however, does not want CPEC to remain confined to Pakistan. The economic corridor project will reportedly be extended to Afghanistan and beyond obviously to strengthen Chinese presence in the strategically significant region ostensibly on the pretext of creating job opportunities. There is also a plan to involve a number of other countries too, including Turkey, Saudi Arabia and Russia, in the SEZ’s (special economic zones).

CPEC is by far the largest and most ambitious part of the Belt and Road Initiative (BRI), aimed at connecting Asia and Europe along the ancient silk road. It also includes a huge expansion of Pakistan’s Gwadar port in Baluchistan province as well as increasing road and rail links and setting up $30 billion worth of power plants.

Clarifications by Razzak Dawood and glorification of CPEC by Imran Khan notwithstanding, there are serious reservations among certain groups in Pakistan with regard to CPEC. Pakistan’s religio-political parties, particularly, some of which are now part of the government headed by Khan have always been opposed to China’s expanding footprint on Pakistani soil owing to the various kinds of threats involved, including transformation of the socio-cultural reality in Pakistan These parties have been opposed to the harsh treatment meted out to Uyghur Muslims in China’s Xinjiang province.

There is no commonality in the views of these religio-political parties and those of the Pakistan army on the Uyghur movement, the East Turkistan Islamic Movement (ETIM), which can be understood from the remarks of Pakistan army chief Gen Qamar Javed Bajwa, who told the visiting Chinese Foreign Minister that his country was firmly committed to the cause of eliminating the ETIM as part of its counterterrorism drive.

Some people in Pakistan see the China-funded CPEC as the arrival of a new East India Company to subjugate their country on the pretext of helping it become a manufacturing and export hub. Obviously, the billions of dollars the Chinese will be investing in this mega scheme cannot be without a long-term objective. Interestingly, they will be accomplishing this task with the help of the Pakistan army, which has reportedly raised a Special Security Division comprising 15000 troops to provide security to the Chinese working in the various CPEC projects.

Yet the anti-Chinese allies of the Imran Khan government are keeping quiet. Perhaps, they believe that ideological differences can be kept aside so long as Pakistan is getting benefited economically, strategically and otherwise. Over 30 per cent projects linked to the CPEC process are located in Baluchistan, the most backward province of Pakistan. Eighteen of the 22 projects falling within the framework of CPEC involve investment and financial aid. Only four such projects will be implemented with the help of concessional loans. Nine of the CPEC related projects have already been completed and 13 are in the process of coming up. Pakistan has already benefited with the creation of nearly one lakh new jobs with an investment of $19 billion.

CPEC, however, has serious implications for India as the economic corridor passes through Gilgit-Baltistan in Pakistan-occupied Kashmir. “The CPEC passing through Pakistan-occupied- Kashmir challenges Indian sovereignty,” said the Union Defence Ministry in its annual report submitted to Parliament. Prime Minister Narendra Modi expressed India’s serious concerns over CPEC when he met Chinese President Xi Jinping on the sidelines of the G-20 summit in September last year but in vain. Once the CPEC plan begins to be implemented in Afghanistan and then in Iran, as planned, it will have far more serious implications for India.

Pakistan will continue to nurture its relations with China also because of the US getting distanced from Islamabad on the issue of fighting terrorist elements.

A new angle is coming up as Russia and many countries in Europe too are reportedly showing interest in the Chinese economic initiative owing to negative signals from the US administration under President Donald Trump. Under the prevailing circumstances, Pakistan obviously cannot weaken the China factor in its foreign policy. But all this means a serious challenge for India’s foreign policy managers. Are they listening?