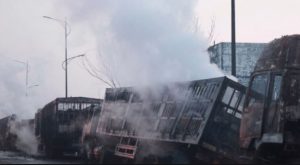 An explosion near a large chemical factory in northern China killed at least 22 people and left 22 others injured on Wednesday, officials said, adding to the string of deadly accidents in the country’s vast industrial sector.

According to the reports, the incident near the Hebei Shenghua Chemical Company in Zhangjiakou, a city some 200 kilometres (124 miles) northwest of Beijing also burned 50 vehicles, including dozens of trucks.

The injured were rushed to the hospital for treatment following the blast, which occurred at 00:41 am, according to the statement.

“Search and rescue work at the site, and an investigation into the cause of the accident, are still underway,” official said in a statement.