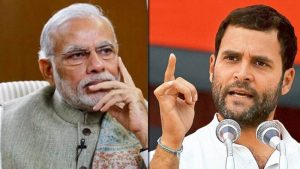 Prime Minister Narendra Modi and Congress president Rahul Gandhi will be in Chhattisgarh on Friday to campaign for the first phase of the assembly elections in the state.

Modi is schedule to address a rally in Bastar district headquarters, Jagdalpur, while Gandhi will be in state as part of a two day tour during which he will address five rallies and hold a road show in Chief Minister Raman Singh’s constituency Rajnandgaon.

“Looking forward to addressing a rally in Jagdalpur. BJP has assiduously served the people of Chhattisgarh for the last 15 years and I am sure the people will again bless our Party in the coming polls. @BJP4CGState,” Modi tweeted.

“This will be the Prime Minister’s first election rally for the state Assembly polls. It will add power to the party’s campaign,” the BJP spokesperson said.

“On Saturday, Gandhi will address rallies in Charama (Kanker district) and Kondagaon, The Congress chief will also chair a meeting of party workers in Jagdalpur,” Trivedi added.

The campaigning for the first phase will end on Saturday.