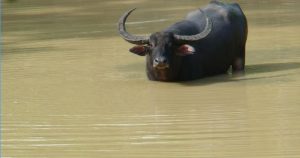 As part of a successful translocation experiment, two sub-adult wild buffaloes, one male and another female, have been introduced in the conservation breeding centre of Barnawapara Wildlife Sanctuary in Chhattisgarh, about 130 km east of Raipur, from the Manas National Park in Assam. The animals travelled via road almost 1,900 km during the nationwide lockdown and reached their destination last month.

The wild buffalo (Bubalus arnee) is listed in Schedule I of the Indian Wildlife Protection Act, 1972. It is also classified as endangered in the IUCN Red List of Threatened Species. Though declared the state animal of Chhattisgarh in 2001, many factors have led to a decline in its population. These include destruction of habitats and inter-breeding with domestic buffaloes.

Vishnu Raj Nayar, deputy director of Udanti-Sitanadi Tiger Reserve in Gariaband district of the state, said that in Chhattisgarh there are two sets of wild buffalo populations, one at Udanti-Sitanadi and another in Indravati. “In Udanti, we have nine animals left and out of that only one is female. So, it is a skewed sex ratio. To increase the population, we need more females. So, as part of the revival plan, we got permission to bring five females and one male from Manas, which has a good population of wild buffaloes. It was the longest journey ever undertaken in India.”

Taking into consideration the population decline and to aid recovery, the Central India Wild Buffalo Recovery Project, a joint venture between the Wildlife Trust of India (WTI) and the Chhattisgarh forest department, aims to stabilise the species’ future in the Udanti-Sitanadi Tiger Reserve.

Rajendra Prasad Mishra, who heads the recovery plan for WTI, said that after the species’ population declined, our organisation was contacted in 2004-05. “We launched a recovery plan. An enclosure was erected and a male and a female were put together for the purpose of breeding and the plan worked. But the female buffalo produced seven off-springs, out of which one was female and six males. So, the female population did not rise as expected.”

The Indravati National Park in Bijapur is a good habitat for wild buffaloes, but the problem of Left-wing extremism has made things difficult due to security issues, which often hampers census and patrolling. So, bringing wild buffaloes from there was not a feasible plan.

According to NK Sharma, deputy director of Indravati National Park, a herd comprising 14 wild buffaloes were found here three years ago. “Even a month ago, three wild buffaloes (male, female and a calf) were caught on camera traps. As this area is Maoist affected, we cannot go for patrolling frequently. Camera traps cannot be set up too because of local communities’ opposition to the devices. The animals sometime cross over to the side of Maharashtra. But this area is rich for wildlife due to the presence of perennial water sources,” he added. 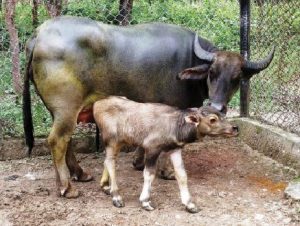 Explaining that translocation is a top policy matter, Sharma pointed out that though in Indravati, the exact population of wild buffaloes is difficult to ascertain, it is a good one.

According to Arun Kumar Pandey, additional principal chief conservator of forests (wildlife), Chhattishgarh, it was decided that those buffaloes will be brought from Assam whose genetic compatibility matches with that of Chhattisgarh. “After the MOEFCC issued permission to transport five female buffaloes and one male buffalo, our team went to Assam in February and completed all the formalities required for the capture, which included erecting an enclosure of semal wood locally called boma. In between, the lockdown happened. The grass availability in the enclosure diminished, and so we could either release the animals or bring them back with us,” he said.

“After due consideration, we were permitted or else our project would have been further delayed. We wrote to the chief secretaries of all the four states through which we had to travel. We received good response, especially from West Bengal. While we were stuck in Manas, Assam took care of our team,” Pandey added. He said that there are plans to bring more wild buffaloes in future. After the situation normalises, perhaps this year again our team will travel to Manas and capture four more females, but it all depends on the situation. Had it been a normal scenario, we would have gone back to Assam for the second round of capture, Pandey explained.

Nayar pointed out that the most challenging part was the travel after much energy was invested in capturing the pair. “It was all about adaptability of the animals. Moreover, we had to clean the vehicle, give food to the pair of wild buffaloes, monitor them and also continuously move.”

The Chhattisgarh team reached Manas in February first week and started the capture process on elephant back, but the animals somehow managed to escape even after several elephants converged from different sides. The process of tranquilising the animals was difficult and there was a gap of 10 days between the first buffalo tranquilisation and the second one. The two buffaloes were selected from different herds because if the gene pool becomes limited, the risk of getting exposed to diseases increases.

Rakesh Kumar Verma, assistant conservator of forests and wildlife veterinary officer, Chhattisgarh considers it a crucial operation, as it was the first ever capture of wild buffaloes in the country. “We did not have any reference regarding the capture. In the case of ruminants, transquilisation is a tricky business. Even the drug, Etorphine, was not easily available as it is a potent narcotic.”

Verma added even though at first the capture was tried on elephant backs, height proved to be a problem. “Luckily on the first day, we managed to get one buffalo from the elephant, but after that, we had to ambush from tree tops.” In the next operation, Verma is planning to construct maachans on trees at strategic points around October-November this year. In December, the controlled grassland burning starts in Assam where grass dries up to 60-70 per cent. It is a practice which helps new shoots to come up and according to that we will plan our operation, he explained.

He also admitted a limitation with the air propelled dart gun which was used to discharge the medicine. It is windy in the grasslands, and the gun could cover a distance of 60-70 metres only. Now, the Chhattisgarh team is planning to buy a new one for the second phase of operation which can shoot the dart from a distance of 150 metres.

Verma said the pair of wild buffaloes was comfortable with each other because of their different sex. Most of the times they travelled in one compartment of the vehicle together.

Mishra, who holds a Phd degree in wild buffaloes, has surveyed Indravati five times. “But as bringing wild buffaloes from there was not possible, we decided on Manas. Another criterion was only bringing sub-adults (around three years), as it is difficult to bring adults from over a long distance.”

“There is a plan to bring more females in the near future. Preparations are on for breeding plan at Barnawapara. We have also involved the IUCN (International Union for Conservation of Nature) and held meetings with the chief wildlife wardens of Madhya Pradesh and Maharashtra, who have agreed on conservation breeding plans as well. In the last century, wild buffaloes were found across entire central India. So, the aim is to repopulate the region once again and we have planned for the next 10 years,” Mishra pointed out. He added that for Udanti-Sitanadi, breeding has to continue and protection of the animals ensured either by patrols or through the attachment of satellite collars.

Bhaskar Choudhury, head veterinarian for northeast, WTI, said the organisation started work on wild buffaloes, collected genetic samples and sent them for analysis at the Centre for Cellular and Molecular Biology (CCMB) in Hyderabad. “We had sent the genetic analysis of Kaziranga buffaloes as well, but CCMB suggested that Chhattisgarh should go in for Manas. In Manas, the population estimation was carried out in 2018-19 and 600 plus animals were counted.” The global population is less than 4,000. He said that as the species is endangered, there is a need for a good number to continue the population. The main threats are destruction of grasslands, hunting and hybridisation even though Choudhury ruled out hybridisation in the case of Manas. “But in other areas,  domestic buffaloes have got mixed with the wild ones,” he added.