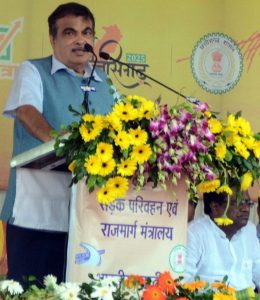 While addressing a gathering at Charoda in Durg district of the state, he said use of alternative fuels will cut down our dependence on petrol and diesel.

On Monday, Gadkari laid foundation stone of eight construction works worth Rs 4,251 crore, including four fly-overs between Raipur to Durg.

He further added that Production of wheat, rice, pulses and sugarcane is ample in Chhattisgarh and growth rate of the agriculture sector is also good.

However, the state can also emerge as a bio-fuel (production) hub, Gadkari said.

As the state has enormous potential for production of bio-fuel. This will create job opportunities for farmers, tribals and forest-dwellers and empower them, he said.

Gadkari said, by switching to ethanol, methanol, bio-fuel and CNG, it will cut down dependence on petroleum and reduce the prices of petrol and diesel.