Of late the issue of women’s safety has come under focus with shameful regularity with crimes against women showing no signs of ebbing. Stalking is often dismissed as harmless by law enforcing authorities without realizing how traumatic it would have been for women. In most cases, acid attacks, kidnappings and murders are the aftermaths of stalking. It is rarely that a woman gathers the courage to lodge a complaint and take up a fight against stalkers apparently because of the image of police.

Creditably, the Chandigarh Police has done well by showing alacrity and exhibiting zero tolerance to crime against women in the recent incident of a woman being stalked at night by two men from an influential political family in a car. The girl, daughter of a Haryana IAS officer, displayed unusual courage and presence of mind in dialing 100 for police help as if to prove wrong, the noted poet William Shakespeare who penned “frailty thy name is woman”. Unfortunately, the police have mishandled the case.

The sequence of events shows the intent of the two stalkers. At 12.15am, the victim was driving to her Panchkula home from Chandigarh when she noticed a white SUV following her. For next 20 minutes, the SUV tried to overtake her car. At 12.35am, the victim called the PCR complaining against the stalkers. At 4.57am, an FIR was lodged against Vikas Barala, son of Haryana BJP chief, Subhash Barala and his friend Ashish Kumar under IPC Section 354 D (stalking) and Motor Vehicles Act (driving by a drunken person) Section 185.

Due to these soft bailable sections, the two were granted bail immediately. As one of the accused tried to open a door of the girl’s car, it was no longer just a stalking case. The case warranted the imposition of IPC Sections 506 (criminal intimidation) and 509 (insulting modesty of a woman).

An impression has gained ground that the police was trying to help the son of Haryana BJP Chief. It is ironic that Haryana State has launched the campaign of “beti bachao” and it is here one finds most cases of female foeticide, lowest sex ratio and now State BJP Chief’s son involved in this crime.

Separately, a 12-year-old girl on her way to school to celebrate Independence Day was kidnapped and raped in Chandigarh. We at Tehelka feel that these incidents should lead to a debate: How serious an offense stalking is? Why women shy from lodging complaints against stalkers? Why it is rare that accused are punished? Why victims are blamed, trolled and their integrity doubted by asking them questions as to why they were out at night or dressed up inappropriately? 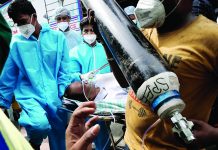