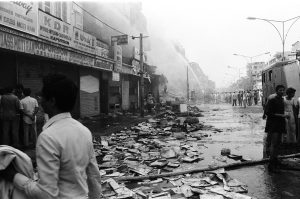 The Union Government has told the Supreme Court they have accepted the recommendations of a special investigation team (SIT), headed by retired Delhi High Court judge Justice SN Dhingra, which has probed 186 cases of the 1984 anti-Sikh riots, and they will take appropriate action.

Reportedly, the report has said that police, government and the prosecution lacked in submitting their findings before the court at the right time. The Dhingra Committee has said that the Delhi government at the time and police did not file their reports on time, which led vital records of the cases to get lost.

The SIT, also comprising retired IPS officer Rajdeep Singh and serving IPS officer Abhishek Dular, was set up by the apex court on Janaury 11, 2018, to supervise further investigation into 186 cases in which closure reports were filed earlier. The SIT presently has only two members as Singh had declined to be part of the team on personal grounds. The Supreme Court has allowed petitioner SGS Kahlon of Delhi Sikh Gurdwara Management Committee to file suggestions on the report submitted by the SIT.

A bench headed by Chief Justice S A Bobde was informed by senior advocate R S Suri, appearing for the petitioner, that the report of the SIT is damning for police officials and they would file an application seeking action against the cops who were allegedly involved in the ghastly riots. Solicitor General Tushar Mehta, appearing for the Centre, told the bench that they have accepted the recommendations made in the report and they will take appropriate steps.

“We have accepted the recommendations and we will act accordingly as per law. Lot of steps are required to be taken and it will be taken,” Mehta told the bench, also comprising Justices B R Gavai and Surya Kant.

Large-scale riots targeting members of the Sikh community had broken out in the national capital in the aftermath of the assassination of the then prime minister Indira Gandhi by her two Sikh security guards on the morning of October 31, 1984. As per official version, the violence had claimed 2,733 lives in Delhi alone.

The report says that the whole effort seems to have been to hush up criminal cases by the police, administration and even judiciary. The SIT said there was no intention of punishing the culprits and that acquittals were “handed over by judges” to the accused in a “routine manner”. The cases were registered to give “clean chit” to certain persons, it said.

The report, which was submitted in the apex court, dealt with 186 anti-Sikh riots cases referred to the SIT which was set up by the top court on January 11, 2018, to supervise further probe into these cases in which closure reports were filed earlier.

The Bench was informed by Mehta that the records of these cases were kept in the apex court registry and these should be returned to the CBI so that further proceedings could go on. The Bench directed that the records be given to the Ministry of Home Affairs.

◆One such FIR had complaints regarding 498 incidents. Only 1 probe officer was assigned

◆Proceeded with trial of several crimes that took place at different locations, times together

◆Due to protracted trial, victims and witnesses were tired of coming to the courts and most gave up

◆Action be taken against erring officials. SHO case be referred to riots cell of Delhi Police

Justice Dhingra has shortlisted 10 FIRs where he felt the government should file an appeal against the trial court’s verdict. Justice Dhingra has also named SS Bal, the judge who was exclusively mandated to try all riots cases in Delhi from 1989 to 1995. “He acquitted all accused in all the riots cases that he decided,” he told the news channel.

This was the eleventh such probe body to look into the riots that ensued after the assassination of then prime minister Indira Gandhi in 1984, resulting in the killing of over 3,300 Sikhs across the country. Before the Justice Dhingra committee, a total of 10 committees, commissions and teams had been formed to investigate the 1984 riots.

On SIT report, BJP leader and Union minister Prakash Javadekar said the Special Investigation Team (SIT) headed by retired Delhi High Court judge Justice S N Dhingra has brought to fore the truth and said what happened in 1984 was not just riots but the “worst kind of genocide” against Sikhs.  Javadekar said Congress leaders like the then prime minister Rajiv Gandhi and more recently, Sam Pitroda “justified” the violence with their comments. The report shows that the hands of the Congress are with “murders”, he said.