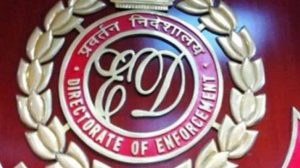 The centre on Tuesday removed Enforcement Directorate’s special director Vineet Agarwal, for his alleged interference in relieving an investigating officer of the agency in the Nirav Modi money-laundering case without following due procedure, officials said.

As per the sources, Agarwal was transferred back to his original cadre.

Satyabrata Kumar, an ED joint director on March 29, was in London for a hearing in the Nirav Modi case, when Agarwal issued the controversial transfer orders. However, within a few hours ED Director Sanjay Mishra issued a fresh order and cancelled Agarwal’s signed order, asserting that Agarwal was not authorised to take the decision against the joint director on his own.

On Tuesday, the Finance Ministry issued an order after receiving sanction from the Appointments Committee of the Cabinet, subsequently the Enforcement Directorate headquarter in Delhi issued the orders relieving Agarwal from the post of special director of the agency in Mumbai.

Officials explained, A special director is only empowered to transfer or alter the charge of an official up to the level of an assistant director.

A 1994 batch IPS officer of Maharashtra cadre, Agarwal was appointed as special director in ED in January 2017 for five years.