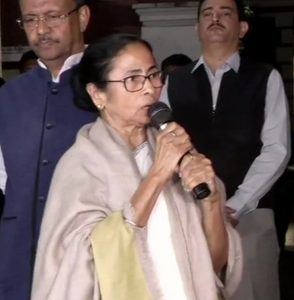 West Bengal Chief Minister Mamata Banerjee have started her dharna against alleged misuse of the CBI by Modi government and to save the constitution. She made this announcement outside the West Bengal Police Commissiobner Rajeev Kumar residence where a clash between 35 officers of CBI and state police was witnessed on Sunday evening. CBI have alleged that police have arrested five of its officers who had gone to question Rajeev Kumar in Sharda Chit Fund scam.
Mamata alleged that there is situation of undeclared emergency in the country. She strongly lashed out at Prime Minister Narendra Modi, BJP chief Amit Shah and National Security Advisor Ajit Doval.
She alleged that Modi-Shah duo have destroyed the country but she will not allow them to do this more. She asked all the police forces in the states to be united against such kind of the actions by the centre and alleged PM Modi is misusing the CBI. She said that end of the Modi government is very near and she will not sit silent till the end of this government. She alleged that a huge number of CBI team reached PC’s residence which indicate that there intensions were not good. She alleged that Modi-Shah have damaged basic federal structure of the country. She said her party will protest in the parliament also on this issue on Monday.
The CBI officials, who turned up at the home of Kumar, had been dragged off to the Park Street police station. “How dare you come to a police commissioner’s home without warrant,” questioned Banerjee furiously. 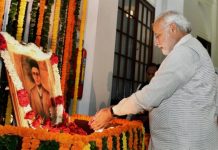