The Central Bureau of Investigation (CBI) on Monday will move the Supreme Court against the showdown on Sunday after the Kolkata police detained CBI officers outside Kolkata Commissioner Rajeev Kumar’s residence.

The team of CBI officers had gone to question the police commissioner Rajeev Kumar on the chit fund cases.

Interim CBI Director M Nageswara Rao, said that the West Bengal police were not cooperating, therefore, “we will approach the Supreme Court on Monday”.

When the CBI team reached Rajeev Kumar’s residence, it was stopped outside by officials and sentries, A team of Kolkata Police officers rushed to the spot to speak to the CBI officials and tried to enquire whether they had the required documents to question Kumar.

West Bengal Chief Minister Mamata Banerjee on Sunday sat on dharna against alleged misuse of the CBI by Modi government and to save the constitution.

Mamata alleged that there is situation of undeclared emergency in the country. She alleged that Modi-Shah duo have destroyed the country, but she will not allow them to do this more. 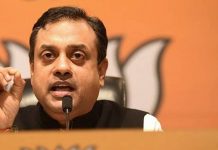