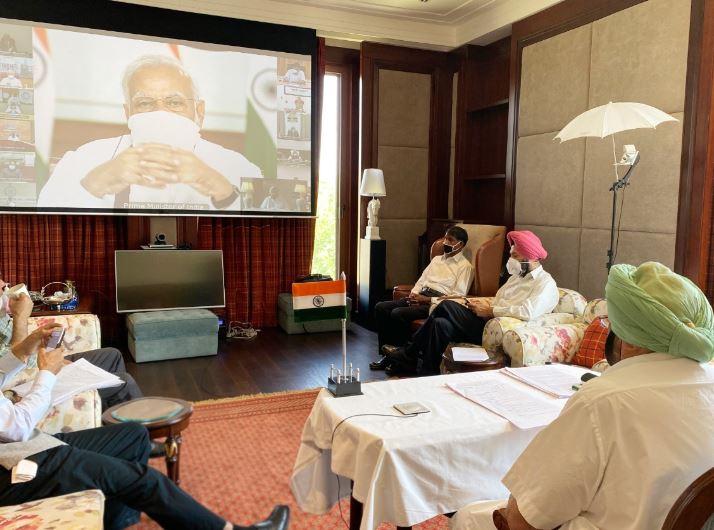 Punjab Chief Minister Captain Amarinder Singh on Saturday recommended extension of the national lockdown by at least a fortnight, while suggesting a slew of health and relief measures to the people in the state’s COVID-19 battle, in addition to special concessions for industry and agriculture sectors on an urgent basis.

Participating in Prime Minister Narendra Modi’s Video Conference with all the Chief Ministers, Amarinder pointed out that there was huge uncertainty about the likely incidence of disease and the nation was in for a long fight. Given the trend in China and several European countries, it was necessary to continue the lockdown, he said, adding that though the restrictions were causing a lot of hardship to the people, India could not afford to take any chances. The people of Punjab have a high morale and will continue to support government efforts to combat the pandemic, he added.

The chief minister informed the meeting that the state government had already decided to go for curfew/complete lockdown till May 1, with all educational institutions to be closed till June 30, with state Board examinations also deferred till further orders. Section 144 remains in place, along with prohibition of public service vehicles till May 1.

The Chief Minister further requested Rs 500 crore for quick upgradation of infrastructure of government hospitals in Punjab, which is currently at stage 2 of the pandemic and has a large NRI population. He also called for speedy approval, on priority basis, by the Centre to the state’s proposal for Rs 550 crore project to set up an Advanced Centre for Virology in Punjab.

On the relief measures needed urgently in the light of the current crisis, the Chief Minister urged the Government of India to defer recovery, and waiver of interest and penalties, on industrial loans for six months. Emphasising that the industrial establishments could not continue to look after their workers, and even pay their salaries for the period of lockdown, for a long time, he asked the Centre to think of some innovative solutions for Relief to Daily Wage Workers and Industrial Labour either through ESIC funds or under MNREGA.

The Government of India may allow village Panchayats and Municipalities to utilize the 14th Finance Commission Grants for emergency relief including food and medicines for the poor and needy, he further suggested.

Referring to the massive harvesting and procurement operations set to begin in Punjab next week, the Chief Minister reiterated his demand for bonus to farmers to incentivize staggered/ delayed procurement of wheat. He also called for quicker movement of food grains lying in FCI godowns in Punjab, along with waiver of three months’ interest on crop loans and deferment of recovery of crops loans by commercial banks.

Thanking the Centre for releasing substantial funds since the last meeting, Amarinder stressed the need for early release of pending arrears of GST on priority to help the state.

Amarinder shared with the Prime Minister the latest update on the situation in Punjab, and the state’s preparedness to deal with the spread of the pandemic.