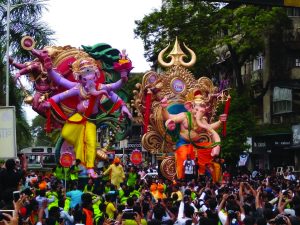 Answer a question this time. Do you feel that the gods became really happy and reserved a ‘tathaasthu’ award for you when you paraded them on Ganesh Chaturthi? Oh by the way, this requires an ASAP answer — before all the maulavis and pundits initiate a fatwa or issue a look out notice for me.

Though this time too, I have again ordered few helmets and safety nets, but I doubt if these Chinese precautionary measures will be even helpful to safeguard me. For our religious leaders are far more powerful than Chinese helmets. Kya bolu, Itni maar padne wali hai. Better you also order with me. You may also come under attack for reading something written against the religious and cultural norms. Or discount bhi mil jayega!

It was a usual Sunday when I starting driving towards the nearest park to practice running for my next marathon. I was hardly a few meters away from my home, when I was forced to raise questions about the nature and existence of gods in India.

There was a huge crowd of people which was more than enough to block all the wide roads of Delhi; music adequately loud to reach the pain threshold level range of your ears but yet not earsplitting as to move the Indian authorities to take any action against the producers of this noise pollution.

While this was not sufficient for the organisers of the tableau (jalsa), they had also hired uniformed band baja and baraat people along with their gadgets so that more decibels can be added to the sound pressure measurement for the evening.

And how can I not mention the big generators that were kept moving along with thousands of people to feed power into the high voltage lights and sound systems. But the other agenda of these portable electricity manufacturers was to add some more fumes into the Delhi air so that Delhi pollution keeps on getting its importance until next elections. Do I also need to talk about Swachh Bharat?

Well, it took me no time to understand that I myself was now a participant in the procession. Being Indian, I had become almost accustomed to such religious rituals where gods are exhibited, dressed with colourful clothes, beautified with ornaments and weapons, worshipped with flowers, fed with sweets, bathed with milk, immersed in water and taken on roads like it was happening now.

It was a perfect cocktail of gods. There were different horse carts with different gods. One after the other, all gods came one by one. I was wondering if any new gods were added and I am not even aware of.

“Would the gods forgive me for this sin?” — I decided to ask for anticipatory forgiveness there and then only as this was the best place to plead.

Happy now to have successfully done my part, I tried to make some more room for my car in the crowd. There seemed to be a clear cut competition between the women of all age groups. From high end dresses to cut style jewellery. I wondered if our film industry even needs Rohit Bal?

“This year India must get the UNO title for the Most Animal-Friendly Country,” she thought.

“No other country has so much of purity in religion, love for animals and respect for women? India must get some award”

We are made more of religion and less of love. The madness for religion scores very high when it comes to testing Indians.

A little piece of land, be it a mosque or mandir is sufficient to boil our blood and kill a few fellow Indians. And if one day we don’t have a piece of land to showcase our love for our religion, we have animals to fight for. So basically we keep our hands busy in proving our loyalty for our religions.

Have you also experienced a time when you have been stuck in the traffic caused due to Nagar Kirtan or Ganesh Chaturthi.

If not this, you must have a memory about Mata Ki Choki or Jagran held in your neighourhood where all the bhajans were well tuned on latest Bollywood numbers. There are other dozens of examples which prove religious interference in our lives and that we have been accepting it all throughout our lives.

It’s high time the government and the legal houses should give us the right to decide if we want to indulge in any religious activity or we want to sleep tight and move freely on roads.

Yashica Jalhotra was just found doing her running practice with helmet on her head. Send her some suggestions how to boost her security at letters@tehelka.com