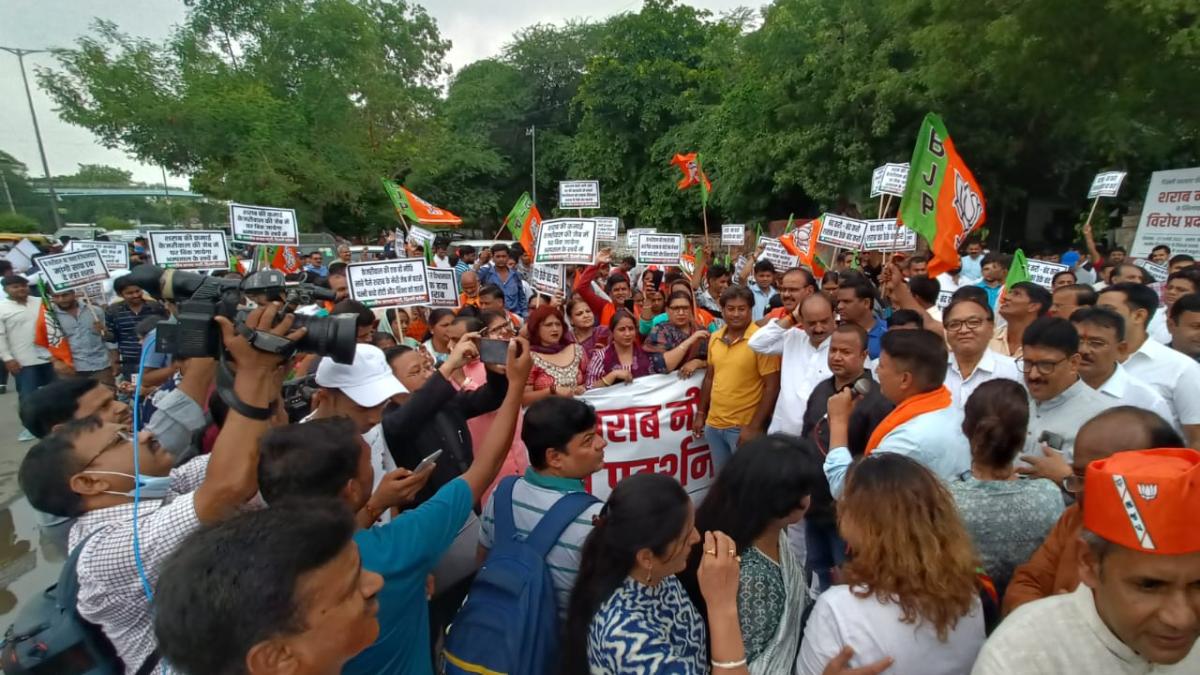 While BJP is using Sisodia’s alleged involvement in Delhi’s liquor policy scam to dent AAP’s ‘clean party’ image, AAP has claimed that Delhi deputy CM is being hounded by agencies to prevent him from campaigning in the poll-bound Gujarat, writes  Aayush Goel

Other than the usual issues of unemployment and inflation it is Aam Aadmi Party’s (AAP) star leader and Delhi’s deputy CM Manish Sisodia who is at the centre of political tug of war in poll-bound states of Gujarat and Himachal. Sisodia who has been one of the most popular AAP leaders and often dubbed as face of educational renaissance in Delhi is star campaigner for forthcoming polls in both states.

While Bharatiya Janata Party (BJP) is using Sisodia’s alleged involvement in Delhi’s liquor gate to rupture AAP’s ‘saaf suthari party” image, AAP has declared Sisodia as modern day Bhagat Singh who is being witch hunted because the party is emerging stronger in both the states. So while Sisodia continues to be quizzed by the Central Bureau of Investigation (CBI) day after day, he says it’s a ploy to arrest him because BJP wants to prevent him from campaigning for the party in poll-bound Gujarat. As all parties gear up putting everything in for the mighty battle of Gujarat, all eyes are set on Sisodia who can prove to be a game changer.

The CBI, in August, began a probe into the alleged irregularities and corruption in framing and implementation of Delhi excise policy 2021-22, following a recommendation from Delhi Lieutenant Governor V.K. Saxena to probe the case. The now withdrawn excise policy was in force in Delhi between November 2021 and August 2022. “Raid was conducted at my house for 14 hours, it revealed nothing. My bank locker was scanned, nothing was found. They found nothing in my village (during a search). Now they have summoned me to CBI headquarters. I will go and extend all cooperation,” Sisodia said in a tweet in Hindi. He was summoned and questioned for about 9 hours on October 17. Manish Sisodia after coming out of interrogation said that a fake case was built against him. He claimed that he was told to leave AAP, else cases would continue. “They said I can also get the chief minister’s chair. But I refused the offer. The entire case is fake. I told them that when a rickshaw puller’s child gets a degree, I feel happy. I am here for education,” he said.

The CBI however said that nothing of that sort had happened and the questions were strictly about the excise policy case. “CBI strongly refutes these allegations and reiterates that examination was carried out in a professional and legal manner strictly as per the allegations against him in the FIR. The investigation of the case will continue as per law,” read the agency’s statement.

AAP leadership is convinced that it is not merely posturing in the battle of Gujrat but fighting to win. They insist that it is their determination and might and performance in Delhi and Punjab that has riled up the BJP to use the crudest weapons in its arsenal against AAP. Sisodia is just the latest target of this effort. 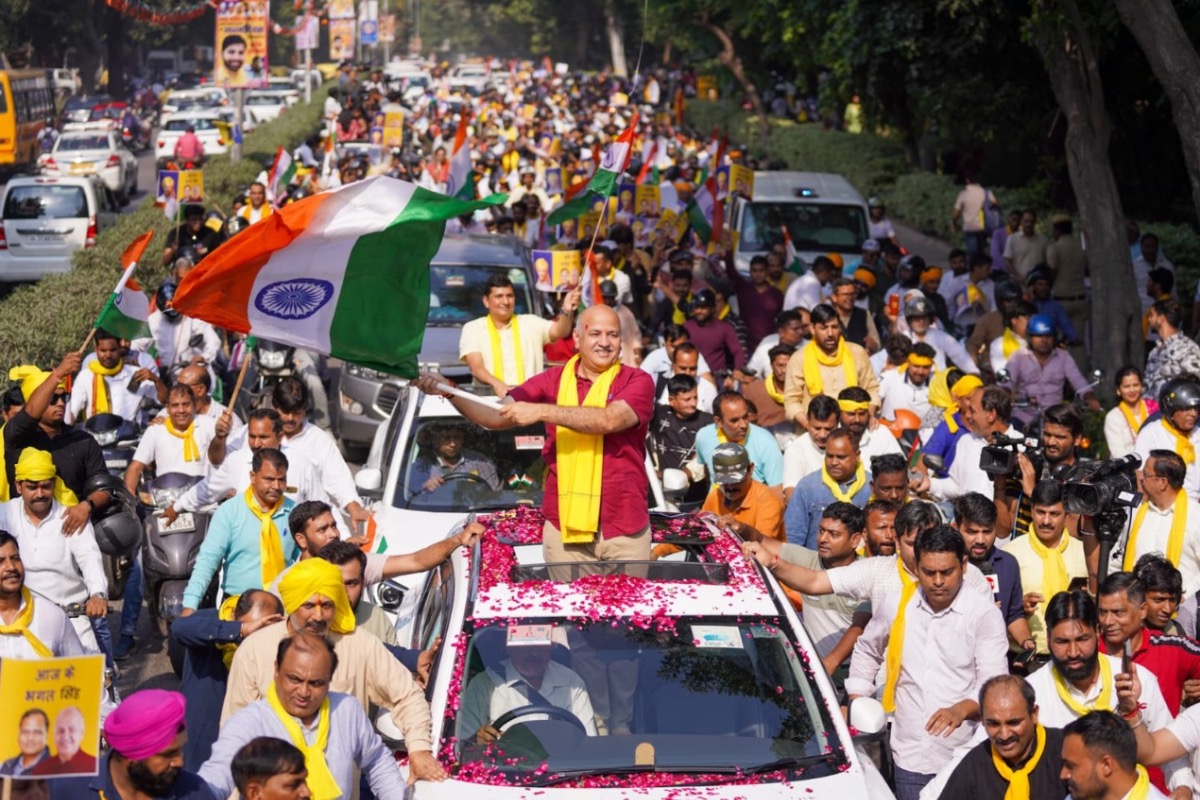 “Gujarat results will be out on December 8. These people will cook up a reason and keep Sisodia in jail till then. So that he does not go for campaigning in Gujarat elections,” says party supremo and Delhi CM Arvind Kejriwal. The tactics however will not deter AAP that called the liquor gate episode as a second freedom struggle. “Jail bars and hanging nooses could not deter Bhagat Singh’s lofty intentions. This is the second fight for freedom. Manish Sisodia and Satyendra are today’s Bhagat Singh. After 75 years, the country got an education minister who gave the poor a hope for a brighter future by giving them good education. The blessings of crores of people are with us,” tweeted Kejriwal.

Even though the popular perception in media circles is that BJP cannot be defeated in Gujarat, Arvind Kejriwal has made it clear that he is in it to win it. After its landslide victory in Punjab, the AAP has turned its focus on Gujarat where the party is trying to hardsell its ‘Delhi model’ and project itself as a political alternative. Kejriwal claims that the BJP is scared of the AAP. The voter mobilisation in AAP’s favour in Gujarat in a matter of a few months has been unprecedented. Even if one is to go by independent surveys such as the tracker poll conducted by C-Voter, AAP was getting 17 per cent votes in early October.

The Times Now –ETG survey, gave the party a much higher vote share of 24 per cent (against BJP at 48 per cent and Congress at 21 per cent) in September. The party however is relying more on an Intelligence Bureau report which Arvind Kejriwal claims that AAP will form government in state even though with a thin margin of victory.

If the AAP continues to attract a quarter of its voters from the BJP and the Congress collapses, it might finally convert the decades-long anti-incumbency against the BJP in Gujarat into a rare defeat.

AAP’s comparison of Sisodia with Bhagat Singh led to a major uproar as BJP lashed out at the party for drawing ‘shameless’ comparisons to allegedly hide its vices. BJP general secretary (organisation) B L Santhosh said, “Anarchist party leader Arvind Kejriwal compares his minister in jail, Satyendra Jain, and Dy CM Sri Manish Sisodia who is facing probe by ED-CBI, to Shaheed Bhagat Singh. From agitation against corruption through Lokpal to shameless stand about corrupt leaders who are being investigated.”

BJP spokesperson Shehzad Jai Hind alleged that the AAP leaders are playing the victim card. He said, “We have PAN card, Aadhar card and AAP has a permanent victimhood card. Witch hunting is not ours, but screaming “victim victim” is their only weapon. They played this for Tahir Hussain, then Satyendra Jain! Both are still in jail! If everything is fake then why did Kejriwal roll back the corrupt excise policy?”.

The BJP states that the party has already lost its ground as per the exit polls and thus playing a diversionary victim card. BJP’s Kapil Mishra, who was once a minister in the AAP government, has challenged Sisodia to appear for a lie-detector test over his claim that the CBI tried to pressure him into quitting the AAP for the BJP.

Who will gain from Sisodia row?

The recent C-voter survey held in Gujarat sort answers for the question that the Sisodia controversy will benefit whom? According to a survey, 42 percent voters feel BJP will be benefitted as it shatters AAP’s zero corruption image while 34 percent feel that AAP will garner more support riding on the victim card with the party alleging witch hunting by the BJP. Twenty five percent feel that while both parties are fighting over it, Congress will be hugely benefited as it will be more focused on voter outreach. However 9 percent of those surveyed feel it’s just another media hype and will die soon as Gujarat will look at local AAP leaders rather than Sisodia. However, going by the events and amplification of the issues, it appears both parties will be benefited with more media attention with new developments in the case.

India is one of the poorest and most unequal countries in...