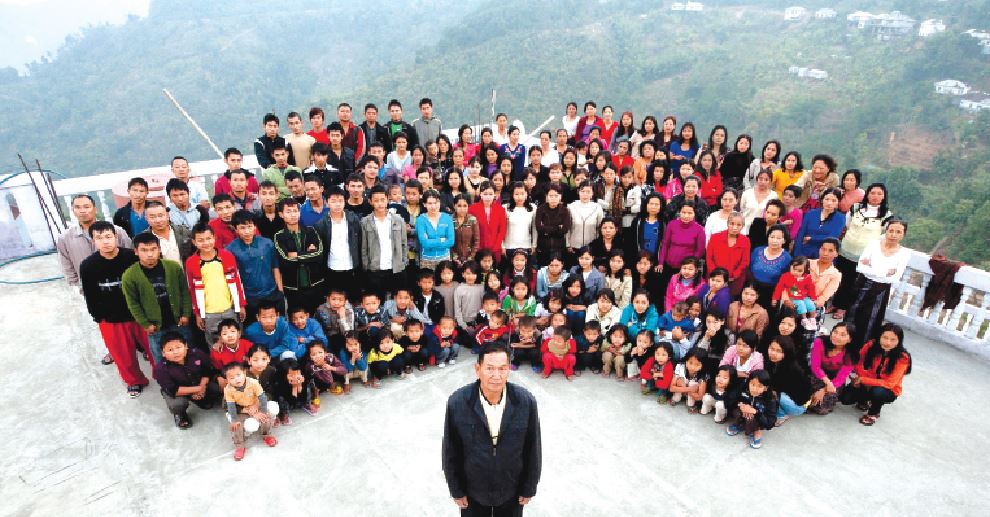 When Mizoram Chief Minister, Zoramthanga recently tweeted, “ With heavy heart, Mizoram bids farewell to Zion — a 76 years old believed to head the world’s largest family, with 38 wives, 89 children and 36 grand children”, it led to a Twitter war on social media. The CM had tweeted that Mizoram and his village Baktawng Tlangnuam has become a major tourist attraction in the state because of the family. A report by SHVETA MISHRA

The predominant theme of the subsequent tweets was that CM’s support to the man was “profoundly misogynistic, this is wrong at multiple levels and the state government supports the man?”

There were sarcastic comments like, “Mr Chief Minister, it would be nice to know how the family is doing? How are they coping with the loss? Emotionally and economically. How does the family sustain itself, please?” Others questioned with tweets, “How progressive and questioned how Ziona kept track of his wives, children and grandchildren?”

In India, polygamy is positively unlawful. It has been declared as an offence under the Indian Penal Code, 1860. The Hindu Marriage Act, 1955 declares a marriage solemnized when the current spouse is living to be void and punishable as per IPC. However, polygamy has always existed in Indian society and despite the existence of laws prohibiting this practice, it is still being practiced in certain sections. Polygamy might not be a common phenomenon today as opposed to monogamy but it still continues to be a part of many debates and discussions.

No matter how much we want to say goodbye to this practice, we have not been able to do so in a full capacity. The Muslim law, however, still allows a Muslim man to have four wives at the same time. Though no such practice is in existence for Muslim women.  Chapter XX of IPC lays down provisions with respect to offences relating to marriage. Section 494 of IPC states that whoever marries another person during the lifetime of husband or wife shall be punishable under this section and such a marriage will be void on the grounds that such a person already has a wife or husband.

The information about the man makes interesting reading. The polygamous man from Northeast whose dozens of wives and scores of children turned his family into a tourist attraction has died at the age of 76, the government has said. Chana is said to be leaving behind an approximately 180 person strong family that lives in Mizoram. The family is part of a Christian sect called Chana Pawl that has around 2000 followers and allows polygamy for men, it was founded in 1942 by Chana’s grandfather. Pu Zionnghaka, also known as Ziona Chana, was the patriarch of a religious sect dubbed the “Mizoram Mormons” after the name of their small state in India’s northeast.

His family members live in a four-storey house called ‘Chhuan Thar Run’ or New Generation Home with over 100 rooms in the mountainous village of Baktawng. While all Chana’s husbands and daughter-in-laws lived at Chhuan Thar Run, in keeping with traditions across the rest of India, his daughters would move away after marriage to live with their husbands’ families. Chana had a bedroom on the ground floor of Chhuan Thar Run where he took turns to be with his many wives. The wives reportedly followed a rotation to decide whose job it was to attend to him on particular days.

Ziona Chana was born on July 21, 1945, and he married at the age of 17 to Zathiangi, his first wife who is older than him by three years. The sect leader, who also had 36 grandchildren according to some reports, married his last wife — number 38 — in 2004.

Chana was the leader of minor Christian sect that is known across the state for its tradition of polygamy.   Chana passed away on June 14 at a private hospital in the state capital Aizawl.  Dr Lalrintluanga Zahau, director of the Trinity Hospital in Aizawl, told journalists, “Zion-a was suffering from diabetes and hypertension. He was undergoing treatment at his residence in Baktawng village for three days. But his condition deteriorated and he was rushed to the hospital, where doctors declared him brought dead.”

Over the years, Chhuan Thar Run drew visitors because of both the family’s non-traditional structure and their remarkable living arrangements. Visitors to his village were so surprised to see the quantity of food they need to cook on a daily basis and the sheer number and size of vessels that the women must wash every day. The Chana Pawl sect extends beyond the Chana family, and is estimated to have about 2,000 members across Mizoram. They celebrate their founding day, also known as the “Bawkte Kut” or “the festival of the hut” on June 12 every year.

Chana was aware of the attraction his family had become and built a “khualbuk” or guesthouse for visitors who travelled to his village to meet them. His family found mention in the Guinness Book of World Records as the biggest family of the world. A 2019 anthropological study titled “Escaping Prophets in Zomia: The Sect of Ziona” by Vanlalpeka of the Department of History, Academy of Integrated Christian Studies, Senate of Serampore College in Mizoram, mentions that the Ziona Chana’s family is “ranked by the Guinness Book of World Records as the biggest family in the world”. The study says the family is also referred to as the “Mormons of Mizoram” due to the “close resemblance of the community with that of the Church of Jesus Christ of Latter-Day Saints”.

The author states that “eligible brides actually pleaded to marry him and sometimes the parents of the bride encouraged the matrimonial tie. There were instances in which he tied the knot with a number of brides together at a time. The brides of such cases are exclusively from their own community, known as Chhuanthar Church (Church of New Generation)”. It mentioned that “Ziona is ever ready and open for more matrimonial alliances”. Another study done in December 2020 says that “only about 2 per cent of the global population lives in polygamous households, and in the vast majority of countries, that share is under 0.5 per cent per cent”. The study goes on to say that: “Polygamy is banned throughout much of the world, and the United Nations Human Rights Committee, which has said that ‘polygamy violates the dignity of women,’ called for it to be definitely abolished wherever it continues to exist.”